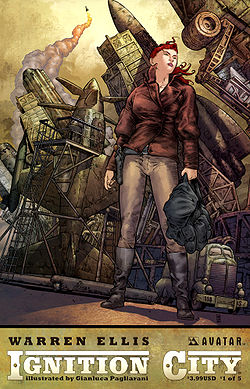 I love Warren Ellis because he loves space in the same way I do. The belief that we should be in space and exploring it. But also the belief that we’re scared and that the government may even outlaw going into space as they do in Ignition City.

Ellis creates a world where people have extensively explored space, but there were a lot of dangers and wars and terrible things in space. Along with the awesome things. And soon every government starts shutting down their spaceports.

Ignition City is the story of Mary Raven, a space pilot. She’s the daughter of one of the first space pilots Rock Raven, and he’s been murdered so she goes to investigate. (At this point, Mary reveals that she’s lost her spaceship to the British government.)

Ignition City itself is something like the Wild West. It’s full of disgruntled space pilots stuck on Earth that have become despondent to life. Additionally, there are aliens living there, and the text seems to suggest that this is the only place on Earth where aliens are living. In Ignition City’s own way, it’s like a prison. But like a good Western town, there’s a pub owned by Gayle Ransom, who was one of the first three humans in space.

Mary finds out pretty quickly who’s responsible for her father’s death, but she doesn’t know the entire story of why he was killed. (Also, don’t read the back of the trade because it spoils you for who killed Rock.) Spoilers now commencing in this review:

Of course, while Lightning Bowman may be the one who killed Rock, there is more to the story to why Rock was killed. Of course, the loyalties in Ignition City work around those who were there in space and those who weren’t. Luckily for Mary, some of space pilots trust her because of her father and with the others, she’s gain a bit of respect. (One she teaches to eat alien food, which is better than food pills.)

I really loved the friendship between Gayle and Mary, and I hope that if Ellis continues this series, there are more scenes between these two because they are awesome together.

Among Mary’s allies is Dr. Dragomir Vukovic, who was good friends with her father. He built the original ships that went to space, and in order to keep him and the others in Ignition City grounded, once a month, government workers come to break apart his machines. Doc Vukovic is key in helping Mary figure out the secret of the island, why planes aren’t allowed to fly over the island, because Kharg the Killer, a genocidal monster and one of the reasons humans stopped exploring space, is still alive and kept on the island.

Marshal Pomeroy, the lawman on the island, knew everything, including about the gun running which got Rock killed by Lightning. While it made sense that someone in an authority position would be the villain, Marshal was the least developed character out of all the ones that come for the showdown. Mary kills Pomeroy with her father’s raygun, and she becomes the law. I really, really want Mary to say, “I came to Ignition City on the trail of the killers of my father…”

The one thing I didn’t like so much about this book was Pagliarani’s art. It’s oddly flat in different parts of the story. I found myself liking about 60% of his work in the book, but weirdly, it was often that I liked 60% of a panel. Sometimes Pagliarani’s art would be incredibly expressive, and other times, Mary would just have a smashed, flat head.

Overall, I found the tale of Mary interesting and well-done. I hope to see more stories about her, especially her and Gayle.

Read the adventures of Mary yourself, buy Ignition City Volume 1