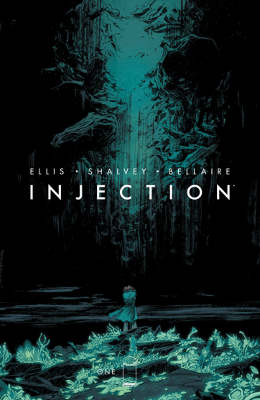 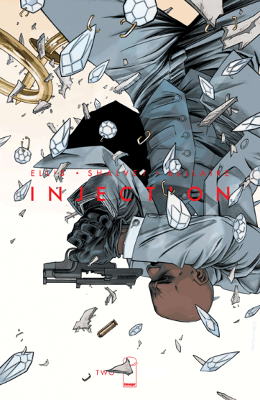 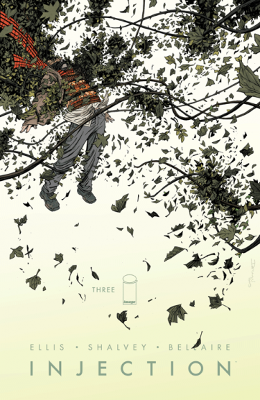 I always greatly enjoy Ellis’ books. However, sometimes his worlds are so rich that they take a while to get into. I felt there was a lot to Injection which hasn’t bubbled to the surface, but would likely make it much more compelling in future issues. This just wasn’t the dynamo bang it needed to be for a higher rating.

Maria Kilbride really needs a sandwich, and someone really needs to bring her one. Of course, the matching syringe (injection) tattoos are really where the mystery starts. It is the power of a symbol, or it is something bigger.

I enjoyed the flashback with the entire team, and I can’t wait for them to all be together again. Seems like their personalities will play off each other well.

Is Robin Morel an English sprite with some connection to the land? Certainly, his name seems to suggest so.

Simon Winters making a joke about how Brigid Roth was his sister to Robin cracked me up. Vivek Headland and his suit intrigue me.

Brigid definitely came into a problem that she may need some help with.

Okay, Vivek wins at life. I absolutely adore him playing as an eccentrically rich white man with all the layers that he’s black and actually useful. Him telling his servant “begone, white devil” was almost too much, but just so right. Same with him tracking all his former teammates.

Oh, Simon, be careful what you wish for. You are definitely living in interesting times, goes the curse. Shalvey’s art works well to show violence, in both we want to see the professional moves, but also it just looks like it hurts.

That last page with Brigid: wow. There’s definitely something major going on, and I appreciate that we’re already seeing the characters emotionally affected by what they do. They may be super spies of a type, but that doesn’t mean they’re completely devoid of feelings.

Okay, my current guess is that Injection is the AI that Brigid created with Darwinism and no really humanity. Which would explain why it needs myths to create what it is and why that guy behind the computer was on fire and connected to it. Though that also seems like it would be futile to use any technology to combat it, which they’re all talking on phones.

This issue made me like Robin a bit more. It’s always good to have one character who’s walking around and denying that they have a power, or a contribution to the world.

What this issue really did was make me like Maria a lot. Especially when she says “apparently, only men are allowed to be tortured geniuses and haunted souls and romantically doomed!” and then points her cane at a security guard and yells at him to open the door. She’s really right. Had she been a man, they’d treat her a lot more like they do Robin. I love how she’s a scientist and forced the grapple with problems out of folklore, which may just be faked.

Dive into Injection Volume 1 and support this blog.