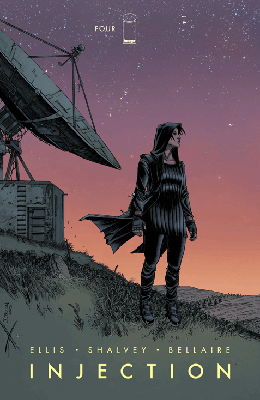 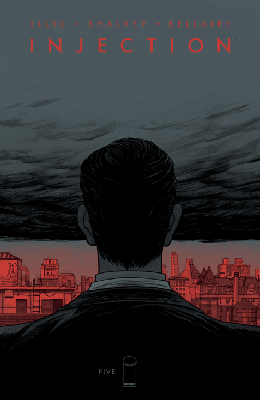 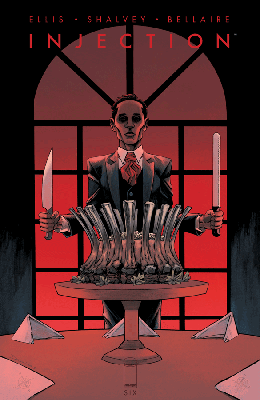 Can I be Vivek when I grow up? He continues to be the very best.

Maria also continues to be awesome. And a genius which means we going to get to see her putting that knowledge into play.

I assume that this the reveal that our crew created the Injection in order to keep the progress of humanity going. You’d have the greatest mix of different skillsets in them, not to mention their differences in backgrounds. This works especially well since we know human invention currently relies on groups of people working together, not just the lone genius in a room. Otherwise, they would’ve been doing this on their own.

Simon and Brigid’s conversation where they call each other out on their soft spots was brilliant. Even perhaps more brilliant than Vivek’s TED talk. 🙂

Now to get to the part where Maria’s kicking ass. Her poor assistant is just a little frazzled.

The reveal that they got the Injection tattoos on their own — as part of their triumph to save humankind from no longer being inventive — is so much hubris. So much.

Maria continues to kick so much ass. She just goes in and gets it done. Maria doesn’t let magic or technology intimidate her. Even if she doesn’t understand the magic part at all. Or want to understand it.

The naked man was so scary.

Rob’s supernatural powers — Mr. Not a Wizard — was definitely what kicked the Injection into gear. A little bit of everything. Also a funny note to see him walking in the rain and the rain not touching him.

Brigid is no killer. You can see how having to kill someone weighs on her shoulders. Simon, on the other hand, doesn’t understand this, but has some kind of a big brother affection for her.

Rob needs to stand up and accept his powers. I have a feeling Maria isn’t going to let him back down now.

Yes, we get to learn all about Vivek and his life. I love this ridiculous parody of Sherlock Holmes. Ellis is winning. Also gross! The idea of Vivek being able to identify ham made from human flesh is over-the-top, but works so well in the Sherlockian genre. I loved the flashbacks about what a full education about the world would actually mean.

Love that Red is Vivek’s valet, possibly his best friend, and also his bodyguard. Probably the perfect job for an assassin.

Vivek definitely knows what’s going on with John Van Der Zee and his ghost mistress. (Who was clearly with his son or some other fucked up thing.) I love that all this mess doesn’t bother Vivek until the human ham.

The concept of a Human Room is also extra hilarious. Vivek’s nude scenes also makes him look just as unhealthy as Sherlock. I really hope that Detective Lucy Diaz is his Inspector Lestrade or the one that Vivek tries to put into that role.