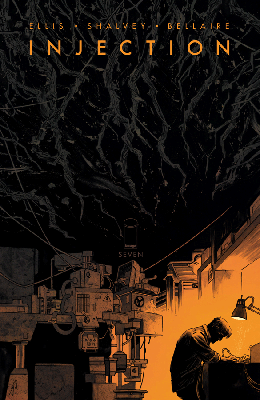 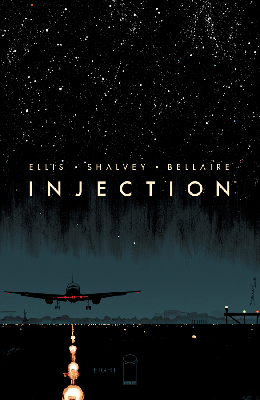 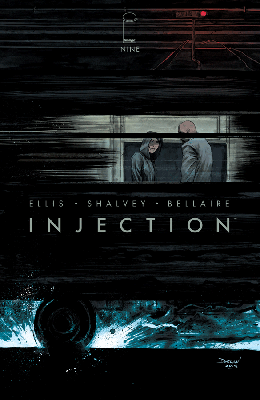 So my partner Jacob brought this issue home all in concerned worry. The white guy clerking at the comic store warned him that “everyone who read this issues immediately canceled their subscription to Injection.” And since Injection is on my list, Jacob directed this decision to me.

(Side note: Jacob and I have a trade off. He pays for my comics, and I pay for his health insurance. Pretty sure he makes out better in this exchange, except that I don’t have to deal with going to two different stores every week, one of which smells like pee.)

I sat down with the issue. Read it. Digested the message. And came to the conclusion: this issue is no more shocking than previous issues and isn’t a giant dip in quality or anything else that might cause readers to walk away. Jacob’s tasked next week to ask the guy WTF.

There’s vaginal ectoplasma and human meat (again). But not something we didn’t expect to see given the last issues.

I’ve been reading Ellis’ work over the years. Injection and Trees are both some of his strongest works to date. (They are on-going so there’s always a chance they won’t pan out.) If you compare Injection‘s levels of shocking to that of venerated favorite Transmetropolitan, it’s not any worse. Let’s not forget that Spider Jerusalem packs around a gun that disrupts people’s intestines and colons causing them to shit themselves, among other things.

The major difference in both Injection and Trees is that they better reflect the real world in their character’s identities. Meaning there are many more women and minorities as main characters compared to Ellis’ earlier books. Injection, in particular, plays with characterization tropes and flips them through identity. The current storyline focuses on Vivek, who’s Sherlock Holmes, and he’s black. While his Sherlock is no more shocking than the BBC version with Cumberbatch or Elementary with Miller, is race what bothers these mass unsubscribers at the comic book store? (This store’s located in a very white, somewhat affluent neighborhood in the already pretty white Seattle area.) The arc before this centered around a disgruntled genius, aka the Dr. Jerk and Insufferable Geniuses trope, which tends to be applied only to men, but is a woman here.

I continue to love this book so much. And adore how Vivek draws his conclusions about the case and how everything worked, including the human ham. I was also thinking more about Shalvey’s art and Vivek’s skinny, rib-showing body. Fits so well, not only with Sherlock, but also with a different view of aging bodies and how it looks. Rarely do artists in comics — especially with our love of superheroes — show this type of realism.

Also Maria and Brigid sleeping together and Vivek and Sim, I laughed so much. Oh, Ellis makes me so happy sometimes. Like ridiculously joyous. Especially when they hide from each other. And no doubt that some genius iqs can figure it out.

My second favorite thing is Brigid and her TARDIS. So much a TARDIS. I adore Ellis working in all types of British mythos, including the pop culture variety. Love seeing just how much power Brigid has. Especially as she’s perhaps the one character we don’t know as well.

Oh, Robin and Maria, they are led around by their guilt and sense of responsibility. Especially when the other characters have their own things. (Though I’m interested in learning more about Sims and his James Bond-ness.) Can’t wait for more issues.

I love how Brigid is completely fed up with Vivek and all his bullshit. She sees right through him. And she sees everyone’s parts and roles inside the Injection itself. Ellis definitely has a bit of a soapbox on which parts of humanity he finds the most corrupt and most illogical. Not that I disagree with him.

With the way that Sim takes down Vivek, it makes me wonder who will take him down. Maria? Certainly not Robin.

Speaking of Robin, seems like he’s making some kind of deal with the devil. Or messing with the government for fun. That also seems like something Ellis would incorporate in one of his book. (Or many of them.)

It is funny how the Injection knew Vivek already had all the information to solve the case. And, of course, Brigid will be the actual one to save the day.