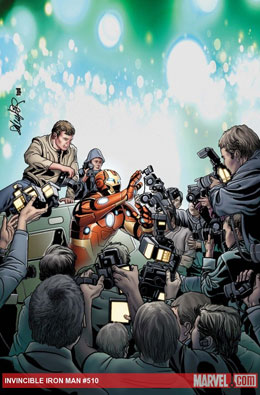 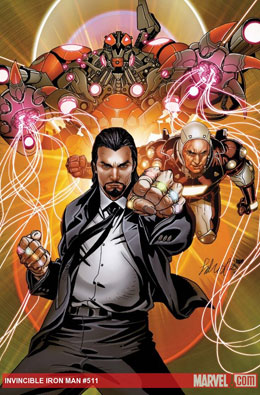 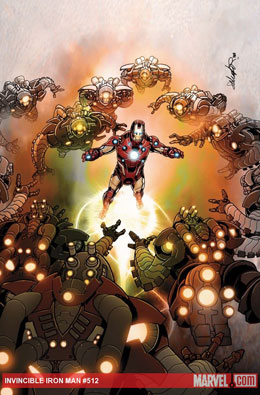 So all the Iron Man villains are teaming up together? Ezekiel, the Hammers, and the Mandarin all coming to attack him at once? I hope they mess around with each other with betrayals and such. It is interesting that they knew Tony had been drinking once again.

However, taking Iron Man to court is not exactly a very interesting plot.

And, of course, Tony would bail on his AA meeting with Splitlip.

My bigger question is where’s Pepper? Where’s Bethany? Where’s the rest of the wacky team? I hope they have some snarky time with Splitlip joining the ranks.

This title is in such a holding pattern for me. I am glad, however, that Tony is back on Earth and back in his own book. I hope that it stays that way for a while longer.

As much as I appreciate just how batshit crazy Fraction’s Mandarin is, I’m not sure how I feel about the suicide bomber angle. While it’s a complete perversion of Tony’s repulsor technology and it works on a symbolic level, in a greater world-aware level, it’s really a bad stereotype.

I love Tony’s all-staff meetings much more than he does. The whole scene was pretty funny, especially as they questioned just who Splitlip was.

What I didn’t love was Bethany’s and Pepper’s pissing match. I thought that Pepper had already resolved to work with Bethany, and I thought that Bethany already knew about the saboteur. (I really hope that it doesn’t turn out to be anyone that I’ve grown to like on the team.) Seemed way too cat-fighty over Tony.

The Hammers just really want to be famous. I’m interested to see what’s going to happen to the original Detroit Steel.

First the awesome, hell yes Henry Hellrung. And 11 thousands parts win that being a superhero aged him.

Second the awesome, Bethany shooting Tim as he wears the armor.

The rest just makes me tired. Fraction writes one sadistic Mandarin — he must be taking notes from his wife — but I’m not sold on the Mandarin manipulating all these other villains. He’s not a team player, and while there’s really not a team here… It just seems off.

The whole Tony-on-the-bottle coupled with the Hammers trying to steal government contracts…yawn. Also, does the military really think Rhodes loves them more than he loves Tony? I mean what kind of slash fanfic have they been neglecting to read?