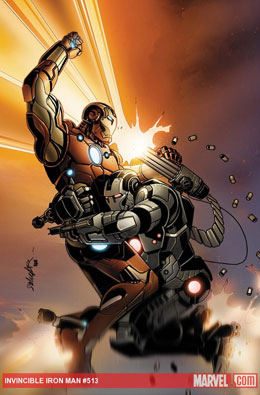 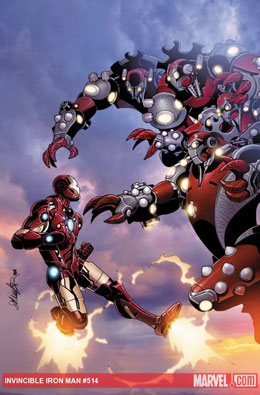 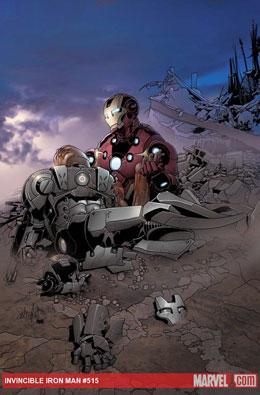 I think this issue is mostly filler. I suppose that I’m supposed to care a lot more about Tony, about his struggle with alcoholism, about how he’s getting blamed for destruction, etc. I’m trying to care. But just can’t.

I wish that his capture by Rodey would’ve been quicker. Or Tony would’ve even noticed that this was happening. Seriously.

While I’ve enjoyed how Fraction has written the Mandarin in the past — and actually made him very scary — I’m not feeling it right now. There’s the control thing. But controlling other villains to destroy Iron Man, those who also want to kill Iron Man, doesn’t make full sense. I suppose in that villains often do turn on each other; but Fraction hasn’t build the story about this yet.

What I’m not getting from this comic book is Tony’s motivations. I don’t understand why he accepted the device that kills his ability to change into Iron Man from Hammer and Babbage. Especially when he knows that they’ll abuse it. Is he building up a court case against them?

Yeah, the courts aren’t exactly going to be in his favor since he sent them all those truckloads of paper files. Also, neither will the rest of the City of Seattle like him for backing up traffic that much. Larroca’s drawing make it seem a much nicer part of town.

Speaking of Larroca’s drawings, he seems to have rather phoned it in for this issue. The backgrounds are just so clean and bare; it’s like no one actually lives in this world. I mean, maybe he’s making a statement about the type of place the Mandarin would live in, but everything seems so stark (pun intended).

The whole scene with Tony making omelets and burning them while talking to Bethany was pretty hilarious. Especially when he wanted to make out and she turned him down.

Mostly happy to see that Rodey isn’t really dead and that Tony is finally putting together a plan. Though I have to agree with Bethany that I didn’t quite understand Tony’s motivation in letting Justine and Babbage control the Iron Man suite.

I’m really creeped out by the Mandarin taking Sasha as his lady friend. Also, hasn’t the Mandarin broken enough laws in a way that he’s like wanted for criminal activity in the US? Doesn’t seem to be like Babbage should be acting all friendly. I can see why Babbage let the Hammers in with their technology being a competitor to Stark Industry’s. But this also doesn’t quite make sense.

I’m so happy that Pepper’s putting back on her Rescue suite.

Those are my very deep Invincible Iron Man thoughts.