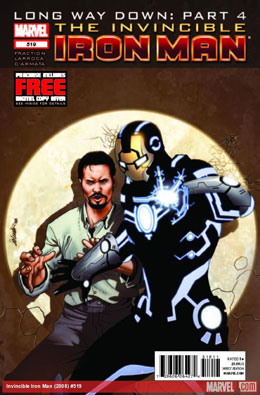 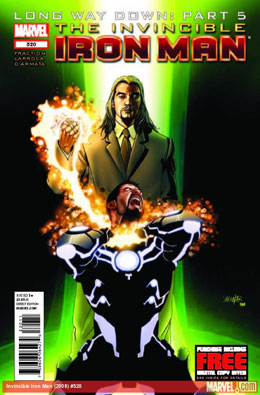 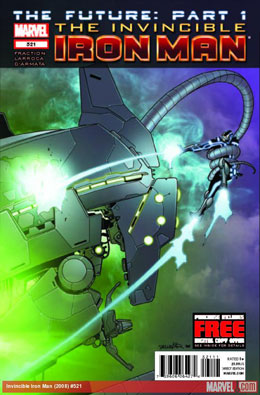 Loving this comic book once again. Of course, the fight between Bethany and Tony would’ve gotten my vote for best thing ever, again. I do hope that she’ll be back, even if that means Tony was right. But there has to be someone calling him on his shit. Since I think Pepper’s about had it. Or too busy running Resilient to have the time.

Wow, Spymaster killing himself, I did not see coming in anyway.

Justine Hammer is one cruel mother. She’s way too confident that exactly what she wants is going to work out. Yes, life has been going her way, but that can only mean that she has a downfall coming soon. Though her downfall might not be Detroit Steel.

There are just so many people out to get Tony.

Poor Tim. Seriously, poor Tim. I just want to give him a hug.

I’m not sure how I feel about the Mandarin being in Tony’s head. I’m unsure about this plotline. Maybe I liked Tony trying to save the world and being all about his futurism. Sometimes I just want to see cool things. (Of course, this book is an odd one given that it tries to be like the movies, and then it has to ignore all the rest of the superheroes in the world.)

How much did I love Pepper being Rescue? That was for the win. I thought the other Iron Man was Ezekiel? I’m a little confused here.

Okay, not caring for this plot where the Mandarin has captured Tony and that Tony was his own internal spy. I’m just not loving how Fraction continually deconstructs Tony. Like I feel that we need some time to recollect ourselves. I mean, Tony’s business got destroyed; then his mind; then sabotage via the Hammers; then there was drinking; and now Tony’s a slave.

I also feel like Mandarin’s prison is nicer than it was. Or maybe just not that horrific when he has to outsource some of his work because he has so many prisoners to maintain. Good thing they all have implants that he can control with those rings.

I do love all of them cheering on Tim on his date. Cute. And some hopefulness.

I am wondering who this new Iron Man exactly is. I hope that Fraction doesn’t drag out the reveal too many issues. I’m just an impatient person.