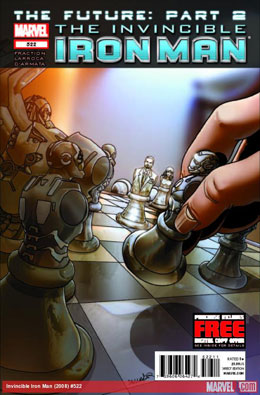 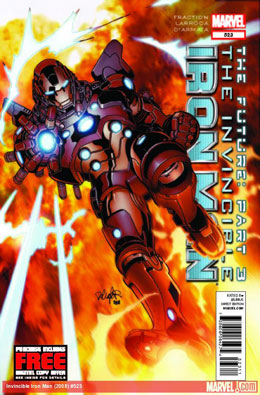 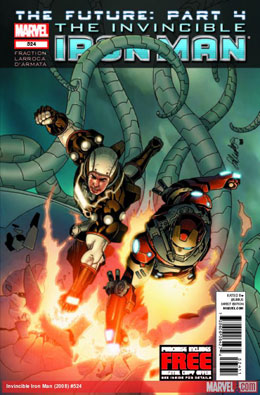 I’m not a huge fan of this issue. It felt light on content. In addition, I’m still not a fan of Tony being prisoner of the Mandarin. I just don’t believe that he’d fall for this entire trap and go so much along with it. Sure, Tony’s working to get away, and he’s started by performing surgery — yep, I’ll handwave that one — to get Ezekiel out from under the Mandarin’s control.

Not a huge fan of the Mandarin’s origin story. I can infer a lot about what Fraction’s trying to say about how institutional oppression can create villains like the Mandarin. However, the story isn’t there. I wish it would’ve been more pages in this story.

Of course, I do appreciate Rescue. There can always be more rescue. However, I’m not intrigued, more annoyed by the new Iron Man.

Yep, I figured that the new Iron Man was Rhodey. That wasn’t much of a mystery, and I don’t know why Pepper was so shocked that Tony kept her in the dark about the entire thing. Though I am surprised to see J.A.R.V.I.S. attack her like that through the Rescue suit.

Not sure how I feel about Pepper and Wyche hooking up. I’m glad that she has someone and that she isn’t waiting around pining for someone…but still.

I am happy to see that Bethany is still with Resilient. I get that statement that Larroca’s making by drawing Pepper and Bethany really similar; but he needs to make them more distinct from each other. Just because they are both gingers…

I kind of could care less about what’s happening in Mandarin City.

I just really don’t understand villains who want to destroy the world…for no reason. Or in general. The Mandarin might not be the sanest guy on the planet; however, he can’t just be written off as so insane that he’s hellbent on destroying the globe. I hope to be proved wrong that he’s trying to call back the aliens that left the rings or something.

And what the fuck is with the Rescue suit being in love with Pepper or whatever. This is just one of those things that’s hard for me.