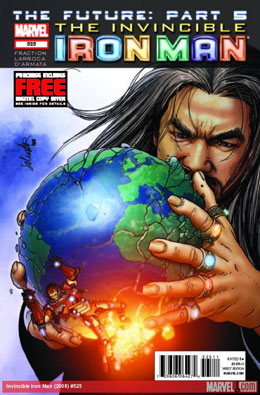 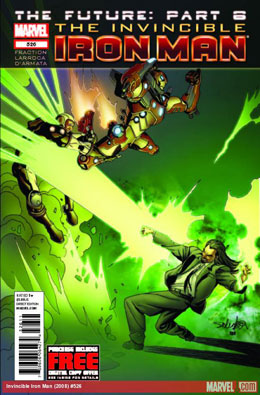 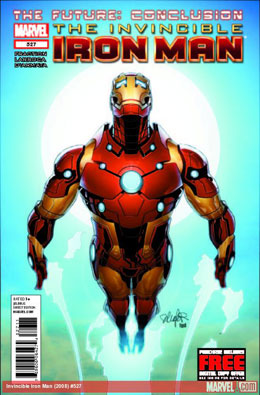 I’m feeling the tug toward entropy with this title. Or is that apathy? I’m not seeing the Mandarin’s motivations to destroy the world, to tear up the Earth’s crust. What is he going to gain? He’s always been a character out for himself, for something, and this is just not making sense. It’s not like he’s building a space station or habibt on Mars or something.

It won’t surprise me if Ezekial gets killed off before Fraction’s run ends. He’s very much a Fraction character, and you know, sometimes creators don’t like others playing with their toys. Even if Marvel owns said toys.

The scene with Rhodey and his mom was funny. I just wish he would’ve called them “women,” not “girls.”

Okay, I didn’t seen Ezekiel killing the Mandarin coming. I figured he’d be back in “bad guy” status at least by the end of the series. (We wouldn’t want to leave any complex gray area threads hanging.) But someone did need to kill the Mandarin off to end the pot, and it wasn’t going to be Tony.

I’m really sad that Pepper had to kill the Rescue suit. And that it had been the one to be compromised and spying on them for the Mandarin. (Okay, I realize there were more compromises; however, the Rescue suit was a big one.) If Pepper doesn’t ever become a superhero again, I’ll be very sad.

It was nice to see that Tony couldn’t win the battle by himself. His crack about not believing in God, but preferring redheads was cute.

Well, that wasn’t exactly the ending that I was expecting. Tony Stark heading off into space for a vacation. Seems like everyone’s doing that. (Maybe he’ll run into Reed and family up there. (Oh, I bet this is some kind of weird set-up for Avengers 2.))

I hope that while he’s gone both Pepper and Rhodey will get back their suits. Or makes ones of their own. Seems like something Resilient could do; well, in Pepper’s case, since her suit never had any firepower.

Justine was the likely character to be sacrificed. Considering she sold out her family to the Mandarin, it’s not exactly like she shouldn’t have expected it. I’m surprised she didn’t at least flinch at Tony’s warning, even if they aren’t exactly friends.

Well, I guess I’ll see where the new title ventures.

Follow the final adventures of Tony and crew until Fraction and Larroca, buy Invincible Iron Man Volume 11: The Future.