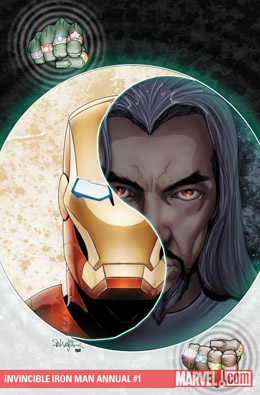 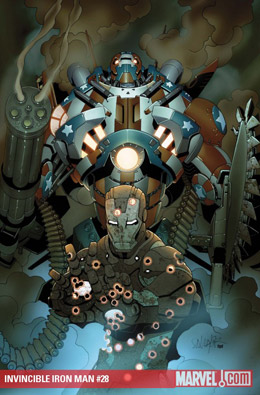 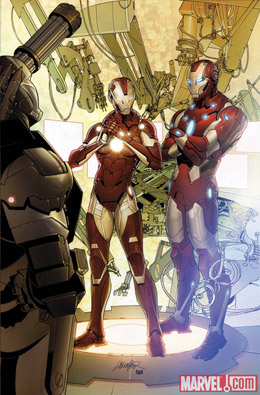 The story of movie director Jun Shan and his wife Chuntao was extremely sad. In fact, this may be the most depressing comic book I’ve read in a long time. (At least a fictional one.) Fraction wrote one hell of a story about the Mandarin and his quest to have his biography — his version of his life — put on the big screen.

I also really loved Di Giandomenico’s art. His art is just dark enough and horrific enough to portray what’s going on. I appreciated that as the Mandarin turns Chuntao into a whore and Di Giandomenico doesn’t go all t&a like lesser artists might’ve. Instead, she’s incredibly sad.

If this is Fraction relaunching the Mandarin as a legitimate villain, then this is fabulous. It’s really important to not just have the Mandarin going up against Iron Man, especially since Iron Man’s Vietnam-Cold War origins and him having an originally stereotypical Asian villain can be tricky to avoid the racial pitfalls when writing him. Which is why Shan, as another Asian man, being the one whose life is destroyed by the Mandarin makes this tale powerful. Pitting Iron Man as an obsession of the Mandarin’s and putting the Mandarin in the Iron Man movie without feeling cheesy is also incredibly effective.

The Mandarin’s tale of himself off-set with the story about how he actually grew up worked well. His delusions about being a hero compared to the reality of what he knows he did was great. As his lies about being part of Mao’s Communist Revolution. I think it’s interesting that the Mandarin almost gives himself a Tony Stark-like background, rich dead Western parents. Which rather makes him a good foil for Tony.

I love Shan, the film director, as the truth-seeker here. I love how despite the horrible threat of death — and his wife’s death — Shan still wants to tell a good story, a true story. Let his camera speak, like any artist would. I also love that he never gives up hope. Even if the ending of this story is heartbreaking. And seemingly inconsequential to the Mandarin.

If you haven’t been reading Fraction’s Iron Man, I highly suggest picking up this issue. It’s basically a one-shot, so you don’t have to worry about story lines. Both Fraction and Di Giandomenico gives 100%. Beautiful and haunting.

Rodey and Tony blast off in their suits to Japan to stop the terrorist. Of course, they only find themselves in a PR nightmare as the Hammers have taken care of the threat with Detroit Steel. Basically, Tony comes off as an ass.

Then when he and Rodey return, Maria chews out Tony for making a fool of himself. Obviously, she’s really missing the man he became as he went erasing his brain and fears that he’s reverting back to his old, playboy self. The on who started Civil War, resulting in Steve Rogers’ death. Which I think Fraction and Larroca point to brilliantly here by Maria remembering when she slept with Tony and Tony asking her if there’s anything about the time he doesn’t remember that he should know about. She, of course, tells him no.

While I love Mrs. Arbogast, I found myself a little bored with the dudes that Tony’s bringing on. They all rather blended together. Too many newish characters (I say newish as I’m sure some (or all of them) are from his 47 year history in comics) for me to keep track of.

But I’m really just excited about next month and Pepper’s return as Rescue. Huzzah.

Maria still being residually pissed at Tony is awesome. And how they just don’t care anymore if they yell at each other in public. Plus, it’s not like either of them have secret identities to protect.

I love Pepper so much, and I’m so happy for her that she has Rescue back. She has such great determination, quickly adjusting her new center of gravity. I like how Rodey was the one there for her when she woke up. Because Rodey is awesome like that and can focus on what’s actually important.

The Invincible Iron Man #28 almost got five stars from me. But I find Tony’s and Pepper’s repulsor technologies repealing each other to be a little bit too heavy-handed of a metaphor about their emotional states. This is too much, Fraction.

On the other hand, Tony romancing Justine Hammer is beyond perfect. Now I can’t wait for those double-layered conversation sparring.