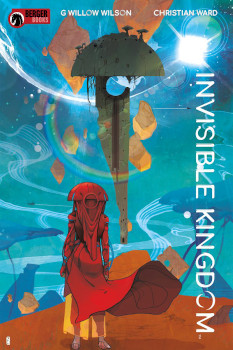 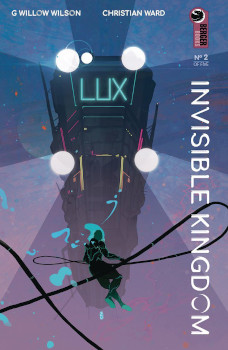 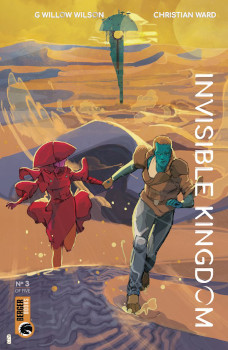 This first issue is very much a ‘let’s roll with it’ start. You have to have faith in Wilson’s world-building and plotting. I’ve read enough of her work to have that trust. Ward’s immersive art brings you into the story in ways few artists do. In some ways, reading Invisible Kingdom felt more like watching TV, or being in VR, than reading something printed on paper.

Of course, Wilson is writing about religion and the corruption of it through capitalism. Of course, this story centered around Vess, a natural do-gooder, and Grix, who’s been hardened by life, but also is a ‘buck stops here with me’ type character. Or, like Grix said, if she hadn’t discovered the boxes were empty, she could’ve lived in happy ignorance and collected her and her crew’s paychecks.

Vess’ approach to her devotion reminds me of the ways Wilson wrote about her own conversion to Islam in her memoir Butterfly Mosque. (My review of it is here.) Though it remains to be seen if Vess will lose her faith, or if Vess will attempt to reform this corruption from the inside. I love how she’s even isolated from the other devotees, both in her attitudes and where in the physical structure she performs her task.

I feel at a loss for more vocabulary to describe Ward’s art. I do think Ward’s view of Vess’ world feels a bit more concrete and plotted than Grix’s. However, since Grix is a starship captain, there may be many places she and her crew go. This world feels a bit Game of Thrones, Doctor Seuss, Blade Runner, and Jupiter Ascending.

Reading this continues to be a lovely and immersive experience. I’m very impressed so far with how Wilson and Ward are handling the world-building while letting us get to know the characters. It’s such a precarious balance in the beginning. Not to mention getting along with the plot!

I’m on the fence if Vess truly thinks the records disparity is a test from Mother Promixa. She realizes it is true that Lux and the Invisible Kingdom’s money are tied together. I wouldn’t be surprised if we find out that they are the same ultimate structure. Or at least, have been corrupted or sculpted to be so.

The early morning rise of Vess’ reminds us that she is at the whim of her religious leaders. Especially since we don’t see her scrubbing out animal cages like Krikko says she did when she first arrived.

Vess’ flashback with their parents was heartening. It mixed a lot of different types of hard conversations with your parents from the general ‘no kids’ to mirroring coming out or leaving a faith or culture; Vess’ time with her parents felt so grounded and real. One strength of Wilson’s writing is showing how universal our experiences are, even when/if we aren’t in identical situations.

Grix’s weakness is her brother, and Lux knows this. She’s someone who doesn’t trust the corporation, and we’ll see how this continues; though I’m unsure how Vess would pick up the distress signal since they are headed away from Lux territory.

I’m curious to see what Wilson will do with Eline. Yes, she’s a Lux representative to be corporate’s eyes and ears. However, Eline did warn Grix about the man they were meeting with and his hard personality. Eline seems to have a soft spot somewhere and may be someone who comes around when she realizes the full situation herself.

Here is where I want Grix and Vess to have more time to talk. I guess we’ll get that when they end up on the ship together. Lots of talking.

I adored them running to Grix’s ship while holding hands. It reminded me of Doctor Who, which is a show I love for how the characters hold hands while running from the baddies. The night art from Ward was incredibly effective at showing the environment and was just beautiful. That moment where Vess says she is not lost was gorgeous.

Rath putting out the distress signal and believing that someone would come to their aid was sweet. While I understand the concept of Lux drones, we haven’t met a character like that. Not even the woman who helps Vess on the street fits a drone personality.

Right now, Grix’s ship is more of a weakness than Eline. But if signals can still get off the ship, I’m not sure why Grix isn’t worried Eline will send one back to Lux corporate offices.

Poor Vess. She got into more than she realizes. And while she still has her faith, she didn’t quite understand that she’d have to leave behind this life she sacrificed for, and she’s been ostracized from the community, which is sometimes the worst part of taking a different view of your religion or going against a belief or authority figure that you disagree with.