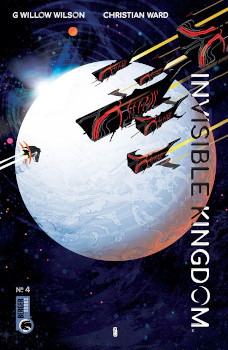 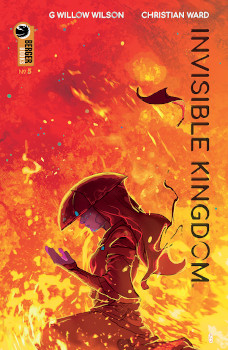 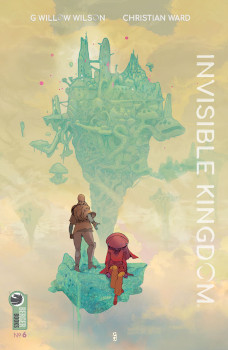 What do you do when Plan A runs out of steam? That’s where Grix, Vess, and company are by the end of this issue. But I don’t think this arc will end with them being shot out of space by Lux.

The interplay for how Vess and Grix interact with each other and push each other to think out beyond their beliefs is perhaps my favorite part. Vess believes they are doing work for the greater path, and Grix knows how to confront corruption. They’re much stronger together than apart.

Wow, I did not see Eline and Grix kissing. This does make me trust Eline more as I think this would be too much of a dirty play. But I do understand why they would’ve broken up in the first place. The view of the two of them from outside of the ship was beautiful art from Ward.

The growling ship captain for the Renunciation was a great foil. It showed the power of the Renunciation, and the lengths they were willing to go to in order to cover up their own corruption.

The ability for Vess to connect with Kikko and find an ally still on Duni will likely prove pivotal. And somehow, I don’t think Eline’s cousin will let them get shot out of the sky.

Of course, the obvious answer is for Vess and Grix to expose the corruption of Lux and Renunciation on the media for the public to see. However, I hope this comic book doesn’t become a remix of the Firefly movie Serenity.

Both predictable and not predictable. I do appreciate what Wilson says here about how, when terrible things are revealed about corporations, religious institutions, and frankly, powerful people, no one seems to take action on caring or be surprised. Like cops are still a thing even though they murder people and abuse their power. Woody Allen still makes movies. Amazon is awful for a billion reasons, but we still all use it. What is that too much?

No doubt, the Renunciation may find itself more heavily hit than Lux, because everyone assumes that corporations are evil. They are, and Elizabeth Warren has a plan for that.

I enjoyed the scene where the ship takes the hit from the Lux warship, and Rath vomiting after they’re jostled around. It felt realistic and more of Ward’s art that pulls you in like a movie or TV show. Except for the noises in space. I know, it’s a sci-fi staple at this point, but there is still no noise in space’s vacuum.

Not sure how I feel about Eline getting jealous of Grix’s connection to Vess. I refuse to believe she was just jealous that Grix thought of Vess, after she counted all her crew and her brother to make sure they were safe.

My only art quibble is the scene on the bridge where Grix and Eline reach out to each other to hold hands. How the scene’s broken up into panels, I know we’re supposed to be looking at their hands, but I found their crotches too distracting.

Grix and Vess’ exchange at the end was beautiful and lyrical. Peak Wilson, with her poetry and philosophy.

I know this book needs to be action-orientated, but I still just want everyone to have an issue where they just get to know each other and sit around. What is this bond? How did it happen? I assume this is some kind of mating bond, and since Downs can have multiple spouses, what are the implications? I want to know more about Vess’ gender and exactly what she’s left behind.

Which is why I wished they would’ve stayed more on her homeworld.

I do not understand why Vess didn’t warn them about the junk raiders. Even Neelix would’ve warned Captain Janeway about something like that, and he was the very worst guide through the Delta Quadrant.

Did Vess notice that Grix wasn’t eating due to their bond? Is that why Grix felt danger, but since she doesn’t know about the bond, she didn’t know how to react? Again, let’s do some kind of ship-in-a-bottle or locked-in-a-cargo-bay issue.

Poor Rath, you can tell that he feels bad about leading Turo to the bridge. Not like Turo wasn’t going to find it eventually.

Eline is certainly dressed to kill. Or something. Though she could be expressing her identity crisis via her outfit, which is probably a healthier way to express it given the limited resources of the ship and not putting them in more danger.