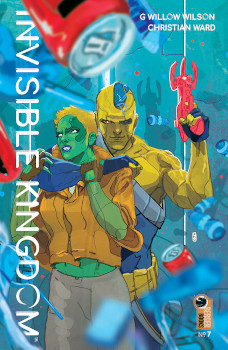 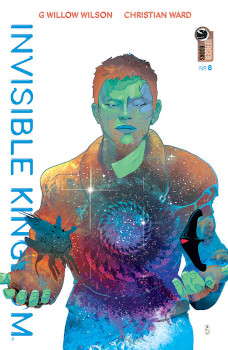 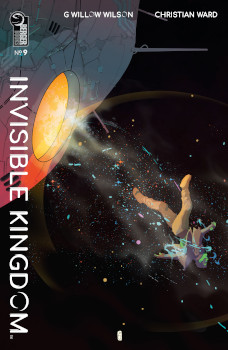 Ward’s art was just over-the-top beautiful here. I loved the splashiness of everything and how the art leads your imagination. Plus, the colors are just gorgeous. This is the way that I want to see space.

Turo should know that Grix values her ship over almost everything else. He doesn’t seem to need the Sundog, so I’m still not sure why he was so very insistent on stealing it and then acting like some kind of Robin Hood. Vess’ reaction to Turo and the other scavengers showed how they don’t just steal from Lux or the Renunifcation, but also from the poor planet of Rool.

I wonder how much Turo will tell Grix about Vess and her bond. He seems to know a lot about what the Rools at least appear to keep under wraps.

Of course, Grix warns the Lux ship, mostly because she wants the Sundog back.

There are so many questions I have about these scavengers and how they just adopt the people they steal from if they’re left without a ship? Or do they usually send people to Rool? This doesn’t seem like a smart way to build a community.

This is the first time that the art got a little sloppy for me. With the introduction of the two Lux employees from the other ship, I have a harder time keeping track of the characters. Beyond Grix, Vess, Eline, and Rath, I have a hard time even noting the other Sundog crew characters, and I wish we had some time to establish them better. This series almost needs a ship-in-a-bottle arc so we can get to know everyone.

Vess is going to have to explain her bond with Grix sooner rather than later. It is nice to know that if the bond isn’t wanted, it will eventually go away. Yay for consent!

The cross and double-cross stuff just isn’t working for me. As much as I do think it’s more realistic that no one would be helping the crew of the Sundog, even if it would behoove the Lux crew. They want that bounty.

Overall, this was one of the weaker issues of Invisible Kingdom, but even a weak issue of this book still stands heads and shoulders above a lot of other publications.

I still just want them to get out of this situation and back on the Sundog. There’s a little bit more with the cast characters we know is sticking around, but not enough.

Eline took a major risk flirting with Turo. Good thing that Vess was there to make the situation seem more desperately plausible. It was so gross to see him try to exploit Vess and what he knows or thinks he knows about Rools and sex.

Unsurprised that Grix goes all hero for Vess. She does that, and she is feeling the pull of whatever’s connecting them. Which since it’s manipulating her emotions, Vess very much needs to fess up about what’s going on. I don’t think she’ll get out of explaining it now.

I assume that Grix will survive her spacewalk. This book wouldn’t be as interesting without her, and she’s too much at the center of the story. Ward’s art of her leaping out the airlock was fabulous.