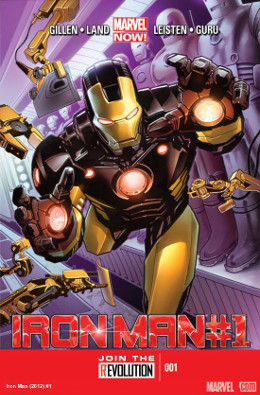 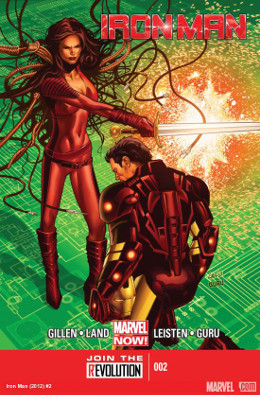 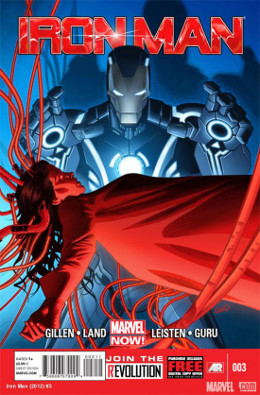 Jesus, do I hate Land’s art. It’s still horrible. Even after he had his realization that he wasn’t going to be a perfectionist and move away from his tracing photo realism.

Holy fuck, stop using that stupid Jessica Biel photo to draw every woman!! I kind of even don’t care what Gillen’s writing as it’s so distracting to see this woman draw like every other woman by Land ever and in the same pose. Her hair and her face tilt are always the same direction. Seriously, go to some figure drawing classes, Land.

Sad to see that Gillen starts off the plot with Maya Hansen’s dead so someone can steal the Extremis project. And then Tony goes off to save the day. Yep.

The beard jokes about Tony being undercover would’ve been funnier if I hadn’t dealt with people freaking out about shaving by an industry famous coworker.

Though as always, Pepper makes me laugh.

Yep, still completely hating Land’s art. I can’t tell who the mystery woman is supposed to be.

I found Tony’s take down of Meredith (Merlin) felt like he just wasn’t destroying her tech, but destroying who she was. And frankly, for a male character to call a female character, who’s supposed to be rather brilliant — may not as brilliant as Tony, but still extremely smart — an idiot and destroy her system comes across as yet another man taking down a woman that he’s threatened by.

Even if this Arthur did call the fight.

Pepper calling out Tony about wearing shades at night, while wearing some herself, was pretty funny.

Beyond the Land art, this book continues to disappoint me. I think I just don’t like Gillen’s take on Tony Stark. He’s too much of a rich, douchey geek.

The entire grilled cheese thing make me roll my eyes way too much. I think Tony’s supposed to have better tastes than that.

Juliana’s story wasn’t quite as effective for me. And I think it just added to the Women in Refrigerators motivations that Tony’s already having due to Maya’s death.