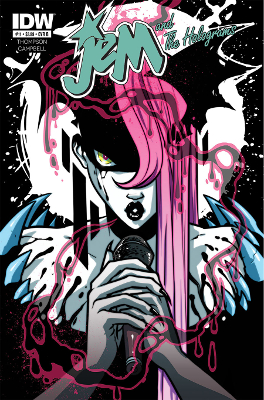 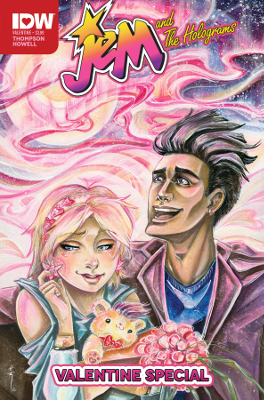 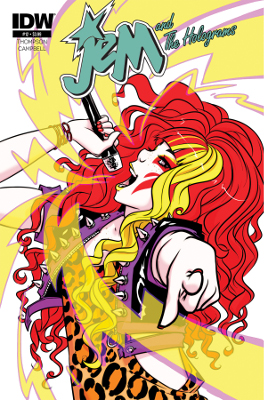 Jem and the Holograms #11 by Kelly Thompson
Art: Sophie Campbell

So if they’re going to go on tour and Synergy has turned them all evil, this should be very interesting. Will everyone there also be affected by Synergy? Or will she kick them out?

It was nice to see everyone that is not Jerrica putting together a party. I love how Campbell gave them similar, but different swimsuits. It worked well.

Aja putting two-and-two together that because Craig is Stormer’s brother that she and Kimber are dating siblings was too funny. (As I don’t recall the original cartoon, the extra sibling dating makes this entire thing even cuter.)

Of course, Blaze actually has a good singing voice. Pizzaz is going to be so pissed, and Blaze and Clash are going to be highly insufferable to deal with. Campbell’s illustrations were great to show how the people trying out sang differently from each other.

Tony and Shana are so cute together. However, her sudden turn to the dark side may just prevent their romance from actually being able to blossom. It’s hard to explain away an evil robot virus when you’re supposed to be hiding said robot.

I’m not sure that I actually buy magic in the Jem-verse. It’s always been technology over magic. I suppose we can forgive the book a little bit, if you consider love to be magical.

Bartel’s style was interesting with the rest of the book. She did a good job. The characters were very cute, but the rest lacked details. The facial expressions Bartel gave Aja were so perfect.

Kimber is going to have some actual apologizing to do. A little bit more than some dishes. Though her Justin Bieber river of tears really cracked me up and made it a nice note to end on. And will she tell the Misfits what happened. Will Stormer feel bad for lusting after another woman?

Roxy falling in love with donuts was hilarious. However, more hilarious was Eric and Pizzaz. There will likely be some regret there. Though if Eric has any true affection for Pizzaz, it would go a long way to show his motivations around ruining Jem and the Holograms.

Jem and the Holograms #12 by Kelly Thompson
Art: Sophie Campbell

Oh, Blaze, you just want to hug her as she comes out as transgendered to the Misfits. I loved Clash’s pep talk to her beforehand, and how Clash says if they reject Blaze due to being trans that “they’re not even worth it.” So freaking true. I love that Clash, the ultimate Misfits’ fan and groupie, is ready to walk away if her friend is rejected for who she is. Just perfect. And of course, the Misfits accept her for who she is.

So everyone is finally and slowly figuring out that there’s something wrong with Jem and the Holograms. They seem a little slow to the uptake. I suppose that’s what happens when you take everything as a best intention like these characters do.

I assume Stormer’s going to figure out there’s something seriously wrong. She and Kimber for reals made up. I just hope Tony and Shana won’t be ruined because new relationships are more fragile.

Are these Synergy zombies? I highly think someone’s going to notice this, and Rio and the Misfits will have to recuse them. Or we’ll have Pizzaz to save everyone.