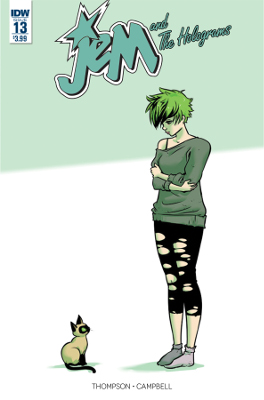 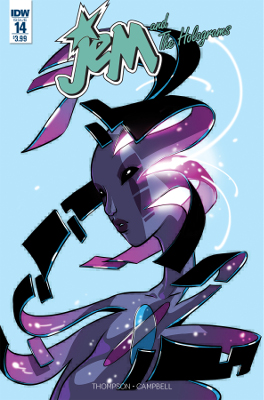 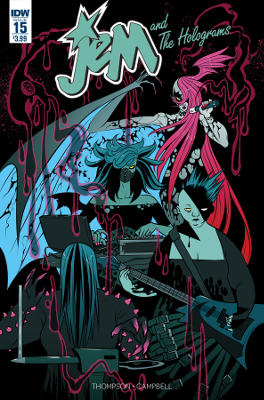 Jem and the Holograms #13 by Kelly Thompson
Art: Sophie Campbell

I’m glad that Rio finally noticed Jem’s off behavior, even if he only noticed because he hadn’t seen Jerrica around. Though if she does want to get serious with him, she’s going to have to tell him the truth. Especially if both Rio and Craig are enlisted to help stop the evil Synergy. You can’t really stop the internet.

Oh, Pizazz. I kind of had hoped she’d be the one to uncover the truth. Instead, she’s hanging out in her bed and acknowledging that Blaze’s singing works for the band.

I loved how much of a fighter Aja is. And also how Rio points out that they need to stop getting into shenanigans where they must kidnap Jerrica’s sisters and let a spell of sorts wear off. It was nice to see it wasn’t just swept under the rug that the Valentine’s Day Special had a similar plot.

Jem and the Holograms #14 by Kelly Thompson
Art: Sophie Campbell

This issue felt like a staller. This is the first issue in Jem and the Holograms where I didn’t feel that it actually moved the plot any. Seems like they spent a lot this issue chasing their tails and, of course, apologizing to their significant others for their personality changes. While keeping the big secret of Synergy and Jem.

Seems like Thompson is getting more comfortable at writing Aja. Which will be nice to have her personality come out more in the future.

Not so sure what I feel about Silica. I mean, Jem’s songs under evil Synergy’s influence would seen viral enough.

Jem and the Holograms #15 by Kelly Thompson
Art: Sophie Campbell

Shocking the entire audience by having a team up between the Misfits and Jem and the Holograms with Pizzazz back on stage seems like a way to go. And a very Jem universe solution.

I love Thompson going back into the past and showing their parents. That their father built Synergy and knew it had problems. That their mom took care of all her daughters and got her husband to come out from behind his computer. And that Synergy looks like their mother. I loved what Jerrica said to Synergy about that.

Eric being kind of upset that he doesn’t get to be a dramatic villain was kind of funny. Techrat complaining about having to save them all was also good.

It is interesting that Shiver gets out of Silica’s control, which says that even with all that technology, there’s still a limit to her powers.