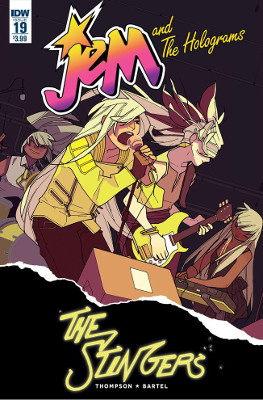 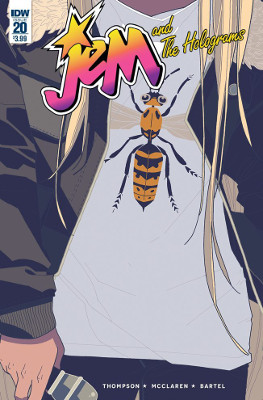 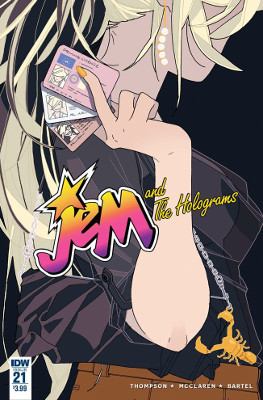 Jem and the Holograms #19 by Kelly Thompson
Art: Meredith McClaren

The tone in the book has changed quite a bit. And it’s not just different artists. Though I find McClaren’s art and shapes to be somber. (I like her art in general, and I loved her and Thompson’s collaboration on Heart in a Box, which was one of my favorite 2015 comics.) But the somberness, it doesn’t quite fit Jem and the Holograms‘ universe.

Jerrica, Aja, and Kimber are sad about Shana leaving. They don’t know how to react around her. They both want to tell her how much they’ll miss her, but also they want to lie to her so she feels less guilty.

This leads Shana to feel more alone, and less like her sisters care about her.

Jerrica would rather be Jem than deal with Jerrica’s problems. Jem has very few problems.

The Misfits are falling apart, and Pizzazz’s temper isn’t helping. Though I appreciated the temper monsters coming out for both Pizzazz and Jem. It worked really well. I wish Roxy and Jetta had more storylines and character development. Especially since we’re introducing a whole new band.

Now the Stingers are also playing shady deals. I’m interested to learn just why Riot doesn’t like the Misfits.

And Riot, the lead singer, he must have some mesmerizing voice power. Or he’s just that kind of male rockstar. Even Elise is smitten.

Jem and the Holograms #20 by Kelly Thompson
Art: Meredith McClaren

I liked McClaren’s art here better than the previous issue. I’m still not sure she’s the best match tonally.

Shana and Tony are adorable. I love how they kind of match in the color scheme, and how they’re on a nice date, acting like adults, while everyone else seems to be going for the immature route. Even Kimber is doing better on the maturity scale than Riot, Jem/Jerrica, Pizazz, and the rest of the Misfits.

This whole thing with Riot is just gag worthy. I already dislike him a lot. I get the conflict of personalities, and how Jerrica’s identity is being split. I kind of want Rio to punch him in the face. (Or maybe he is Rio! I mean, they have one letter different in their names, and it’s not like other characters can’t use holographic technology.)

It’s also rather shit that Riot bragged about getting the Misfits kicked off the label. Even if he claims that he didn’t know who Stormer was.

Craig and Aja are the cutest. Even if Jem and the Holograms are getting set up with the Fox. Though I don’t understand how Jerrica would want to bring in a new band member who doesn’t know Jerrica is Jem is Jerrica is Synergy. Seems like a secret that’d be too hard to keep.

Jem and the Holograms #21 by Kelly Thompson
Art: Meredith McClaren

McClaren’s art continues to slowly mold to fit the book and characters with each issue. I enjoyed this issue, and between the art and the storyline, found it to be one of the better issues in recent reading.

Regine is a great new character. It’s good that Shana has friends in Italy. Of course, they are both just running errands for the designers. They are interns after all. Also, this feels like it will be the catalyst in order for Shana to return home. Though with Fox deleting her messages, she may be less than happy with her sisters. (Side note: likely Shana would be doing more than calling them as this is 2017.)

I do hope that Fox gets more characterization. Maybe we’ll find something more about her, except that she’s there on Pizzaz’s order to sabotage them, as Fox tries to dig into Jem and the Holograms’ secrets. Doesn’t Fox ever wonder where Jerrica is? I know that something Synergy pretends to be Jerrica, but not only is Jerrica the band’s manager, she also lives in that house.

Not sure I like the 100% out to get Jem and company Pizzaz.

Kimber and Stormer being harassed by their shippers was a cute scene. Especially since it seems like it’s been a bit since we’ve had a good Kimber blow up.

Something is definitely wrong with Jerrica. She doesn’t look well at all.