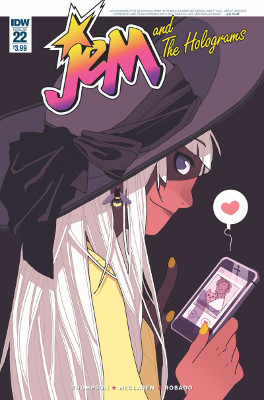 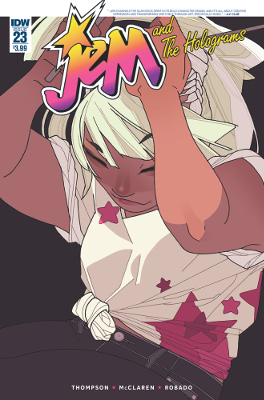 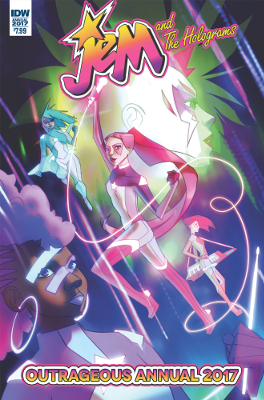 Jem and the Holograms #22 by Kelly Thompson
Art: Meredith McClaren

I was a little on the edge between 3-4 stars on this issue. There were some elements that I really loved. There were others that continue to leave me cold.

McClaren’s art charms me more with every issue. It’s fun to see her art change and adapt to this universe as her time on the title continues. Fashion styles in particular are starting to really show through. Which is a huge part of the Jem universe, and one of the reasons I wasn’t sure about McClaren as an artist choice.

I’m loving Shana’s gall, and her and Regine taking control. It was great to see their boss wanting them to design for her, even if she didn’t realize they already worked for her. It’s a nice reminder for people feeling stuck that sometimes you have to ask for forgiveness later.

The Misfits seem like they are focusing on the wrong thing. All of them, except Pizzaz, seem to question why they aren’t targeting the Stingers instead.

I feel bad for Rio. Jem/Jerrica stuff continues to be extremely odd. I do hope that we see her come out of this. It’s rather like she’s very depressed. Except the weird obsession with Riot. This entire plotline has been a turn off. With Aja and Kimber completely unused and kind of useless.

I’m going to say that Raya will be their new drummer.

Jem and the Holograms #23 by Kelly Thompson
Art: Meredith McClaren

I was very correct that Raya was going to be their new drummer. Called it. This isn’t going to make Riot happy. He’s already upset about getting dumped by Jem, and the rest of the Stingers don’t like Jem and company already.

The performance seemed a little low energy. I’m not sure if it’s McClaren’s art or what.

Things are definitely going to come to a head with Rio and Jerrica.

It was nice to see Shana’s arc come to a resolution, in a way. Of course, she’s going to come home to the band having a great time with Raya as the new drummer. Not to mention Raya knows the Jem/Jerrica secret, which adds another layer of her feeling rejected.

This is somewhat a better idea than in executive. It was cute. It was fun. But I’m not sure it had the layers of substance that this story’s been dealing with. This does, however, seem like a story for the younger crowd. I’m often questioning this book being in the children’s section. YA, yes. But hey, just another reason why I don’t have children so I don’t have to make decisions about this stuff.

It was cute to see them in space. Once thing we haven’t really seen is Synergy taking them on wacky adventures. For having a superpowered hologram, they basically just use it for fashion and music.

I really loved Lagace’s Aja. Especially her hair. She had a great take on Aja’s style and her body shape. Aja looked so comfortable with herself, and it showed off her inner confidence.

The little Roxie and Jetta chibis in Robado’s art were also adorable. Aja’s guitar smacking down everyone worked really well. Kimber in the monster fur costume was pretty hilarious.

Of course, they solve everything with music. That’s very Jem and the Holograms. Bringing Pizzazz down and making her take her heart back. Seemed also like an ending that a bunch of teen girls would create for their story.

It was also adorable to see the girls get extra embarrassed, but excited that the crew read their fanfic.