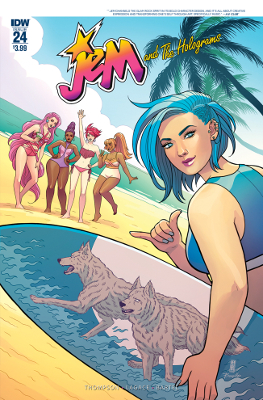 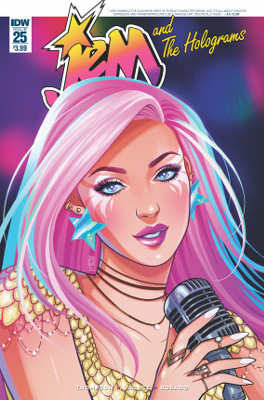 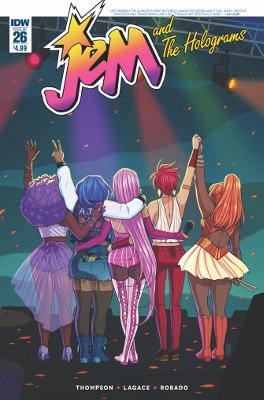 Jem and the Holograms #24 by Kelly Thompson
Art: Gisele Lagace

Overall, this was a solid issue. However, the setup for the next big crisis is extra obvious. Those cameras and Jerrica revealing herself to Eric. This was one of those moments where I remembered how this is actually a YA comic.

I am glad that we’re finally having some resolution over Rio being left out of the secret that Jerrica is Jem. Hopefully, this will also help Jerrica’s mental health. However, Rio has the right to be pissed about Jem technically dating Riot. Who happens to be next door.

Riot has gone from too intense to creep-o.

Of course, Stormer isn’t into the reality TV show. I always wonder about budgets if these cameras can just follow and stalk her, even though she worked hard to lose them. (Then again, this is a comic book.)

Lagace’s art was pretty classic Jem and the Holograms look, a bit of an evolution from the TV show. However, I wanted more fashion. Especially Hawaiian fashion. This is the only time that I’ve felt let down by what Kimber was wearing. Only Jem really felt like a Hawai-appropriate outfit. Otherwise, they could’ve been anywhere warm.

Jem and the Holograms #25 by Kelly Thompson
Art: Gisele Lagace

I was pretty sure that the cameras would capture Jerrica turning into Jem and back again and Synergy’s appearance. Guess I was wrong. Instead, they are trying to exploit Raya’s feelings as an outsider to the sisters.

I’m surprised that Rio, music journalist, has enough money to get a flight home. Emotionally I understand why he leaves. But you’d think he’d demand Jerrica pay for a hotel room or something.

Kimber and Stormer should never be allowed to go into the wilderness. Period. They don’t get adventures in the great outdoors. I do hope this lava doesn’t start acting weird for Hawaiian lava. I can see the writing temptation. But Kimber would likely get some nasty burns from the general heat or gas poisoning.

Am I asking too much realism from my Jem and the Holograms comic? Hey, instead of hiding Jerrica on stage, Synergy could transform Kimber.

Jem and the Holograms #26 by Kelly Thompson
Art: Gisele Lagace

This is the last issue in Thompson’s Jem and the Holograms run. It smooths out most of the lingering plots. (Except the Misfits, which I assume is the miniseries I haven’t read yet, and Riot is oddly missing here.) It does end with the bigger question of how long the band thinks they will be able to continue hiding the Jem/Jerrica reveal from the world.

Of course, that would be easier to explain if Jerrica didn’t become like 7 feet tall when Jem.

I’m glad it’s revealed that Kimber hallucinated the lava, and it was actually the ocean. This makes me feel better about the geophysics of the entire situation. Kimber has a concussion and a sprained ankle.

However, we see Kimber in high heels for their charity stage performance! And then when they walk down their driveway, post-trip, and pulling their luggage, Kimber’s bare legs show no brace. I’m sorry, but if she couldn’t walk after she fell, she wouldn’t be 1) without a brace; 2) in high heels; and 3) pulling her own luggage. Even if it was only mild! If Synergy helped cover up the brace during the performance, I could buy that. But Kimber goes from being in the hospital to being fine. As someone who’s stress fractured both my ankles, it’s not anything to mess around with, and this took me out of the story.

Okay, back to the actual plot…

Rio and Jerrica are a mess. Like such a mess. He tries to give her advice, and it doesn’t work because they both just want to make out. They both act pretty immature here. If Rio wants Jerrica that badly, he should just be with her, instead of doing stoic guy act.

Aja continues to be my favorite. I love her temper and protectiveness of her sisters.

I do feel we’ve explored most of the Jem world as it is. I’m glad that Thompson and crew are shaking things up with the new series. For about the last 10 issues, it seemed like the women were getting into a lot of the same shenanigans and plots were being recycled. I’d love to see these characters grow more.