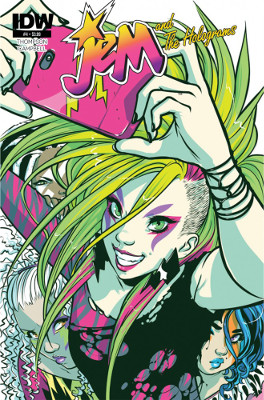 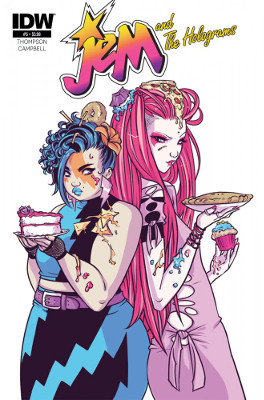 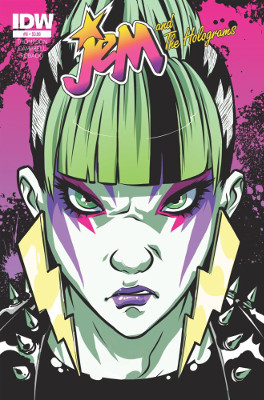 Jem and the Holograms #4 by Kelly Thompson
Art: Sophie Campbell

Of course, Kimber ditches out on helping the band set up for their very first gig. I mean, she has a good reason: Stormer. They are the cutest together. Kimber isn’t just going to let Stormer walk away, no matter what the consequences.

Also, seems like Blaze and Clash might’ve had a romantic relationship in the past. Or they were once best friends. I’m hoping for the former.

Rio is definitely going to put two-and-two together about Jerica and Jem. They are obviously the same person when one appears and the other disappears.

Pizzazz just needs enough rope to hang herself. The critics will be comparing how she acts compared to Jem. Especially if Jem saves everyone from the falling lighting rig.

Jem and the Holograms #5 by Kelly Thompson
Art: Sophie Campbell

So Pizzazz’s cat may be my very favorite character so far. I love the expressions and movements that Campbells gives her. Especially as she’s wearing her kigurumi. Too freaking cute.

But what really made this issue special was everyone rallying around Aja as she healed. Aja has been slightly underdeveloped, especially compared to Kimber and Jerica. I love that we’re learning more things about her besides that her sisters love her a lot. Her at the shooting range to work out her nerves was great too.

It’s also good to see more about Synergy and how she exactly works. They haven’t used the technology very often. Jerica’s definitely not going to have an easy time to find a place to transform at the busy festival.

Stormer’s orange dress was the cutest. I can’t wait to see this in cosplay. At least I hope someone does it.

Oh, Rio, he has the wrong instinct to tell Jerica that he doesn’t think Jem is good for them. This whole thing about him not knowing cannot go on.

Then they all figure out that Clash is the one who caused the damage on the stage. I’m glad it’s a food fight, but I can’t help but also worry about what this might do to Stormer and Kimber’s budding relationship. Or what’s going to happen when they both have to finally take the stage.

Jem and the Holograms #6 by Kelly Thompson
Art: Sophie Campbell

Oh, the continuing tension of Rio not knowing that Jerica is Jem. And that look between him and Blaze… I think there’s more to that. However, it’s all kind of boring me.

I liked there being real consequences to the bad behavior of the food fight. Even if it was just punishment for Jem and the Holograms, not the Misfits. While unfair, certainly how the world actually functions and a nice touch of reality. Especially when you have a super computer like Synergy at your beck-and-call.

I don’t want Kimber and Stormer to be over. But they just might be, especially since Stormer looked none to happy about Jem and the Holograms crashing the battle of the bands and stealing their audience across the street. I would like to see more about how and why the Misfits continue to be together beyond the fame. Especially considering how Pizzazz treats them.

The dinosaur scaring the Misfits might’ve been an abuse of power, but a cute one.

Buy Jem and the Holograms Vol 1 and support this blog.