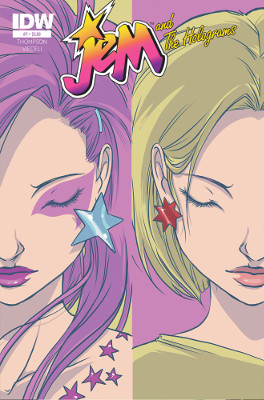 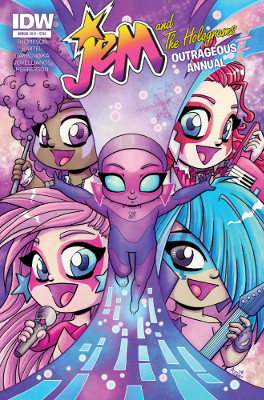 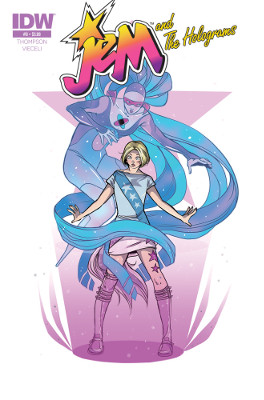 Jem and the Holograms #7 by Kelly Thompson
Art: Emma Vieceli

This issue wasn’t as strong as the past issues. In part, I missed Campbell’s pencils, not that Vieceli isn’t talented, just that Campbell’s style really brought forth the characters for me.

I’m curious to see where Shana applying for fashion school in Milan goes. Especially since they have the technology of Synergy, which I am delighted to see Thompson using her for more than lights and show. Of course, she can build their website. I wish I had a Synergy to help me out with those things. (This site would be so rad!)

Aja and her seemingly boyfriend are adorable. I agree with the line about wanting to be buried in a bread bowl. (Or perhaps “identify with” is a better term. Mmm…bread bowls.)

This Eric guy seems like a bit of trouble. Well, also the other person who he’s hired to hack Jem and the Holograms. I assume Synergy has some great security software though.

This annual was adorable. But you probably guessed that already. All the artists on each of the separate stories were fabulous. Each brought to life the characters in just a different manner and matched the tone of the story and character’s personality. Rarely do I read a book with six different artists working on clearly different story sections where all them did such a fabulous job.

I loved how this annual took Jem to its ’80s roots with ’80s franchises, but each franchise has some kind of modern incarnation and thus will connect with current audiences too. Dream sequences aren’t my favorite — they tend to be overused — but I appreciated how Thompson kept the metaphor of the dream pretty obvious. Dreams are pretty obvious most of the time, so why wouldn’t the characters also have obvious dreams.

Jem’s Teen Wolf dream unsurprisingly shows the conflict between Jerrica/Jem personalities and what she perceives as people loving Jem more. (Well, except Rio.) Not to mention her bad attempts to conquer her own stage fright when trying to perform as Jerrica.

Aja’s dream was probably my favorite with its Mad Max theme. I love being able to show a female character enraged at something. Of course, Aja’s still angry about the time she spent in the hospital. Especially when they figured out who was behind it and seemingly no one was punished for their bad behavior. Her fighting herself and then going off with her sisters in a peaceful mode was perfect.

Shana’s was my second favorite: obvious conflict about her role in the band and her desire to be a fashion designer. The Star Wars theme was cute. Synergy as Yoda was fun, but also made me realize just how annoying Yoda really was. Shana’s decision about staying with her sisters said a lot about her values and her willingness to make sacrifices for the greater good. (And she didn’t even need to lose a hand!)

Kimber’s was rather my least favorite with the Muppets Babies. (Which I did have to Google the theme song lyrics when Kimber sings them at the very beginning of the book.) Maybe I just wanted something more grownup. The theme of the Misfits and the Holograms needing to make peace was nice, same with Stormer and Kimber still having feelings for one another. Plus kitty!

Overall, super cute and what I’ve come to expect from a Jem and the Holograms book.

Jem and the Holograms #8 by Kelly Thompson
Art: Emma Vieceli

I’m highly interested to where this plot with Synergy and trying to hide her is going to go. Especially since they all expect Kimber to spill the beans and Eric has hired the hacker. Synergy is definitely incredibly powerful, much more powerful than just being able to generate some costumes or create a music video. I’m glad to see Thompson bringing this up and expanding on the theme.

Of course, the setup is going to be that Jem and the Holograms will open for the Misfits on their tour dates, and they will extra have to be on their best behavior. The narrative emphasized this far too much.

I would like to see Pizzaz less obsessed with ruining Jem and the Holograms. While I think her power struggle with Stormer brings in points about Stormer’s personality, it would be nice to see something in Pizzaz’s life to make her a redeemable character. She’s much too 2-dimensional.

I am glad that they finally acknowledged how overwhelmed Jerrica actually is with all of her jobs. She does have a ton of stuff that she’s juggling without very much help.