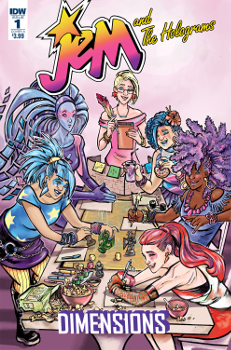 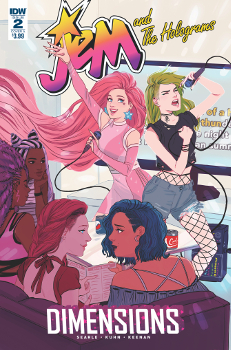 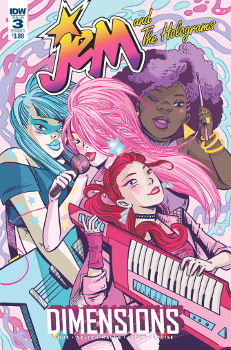 Jem and the Holograms: Dimensions #1

Clash having to cat sit isn’t bad. Mads is adorable. However, I do think Pizazz would flip her shit if she knew Clash was taking Mads on the ski slopes. Like can’t the cat stay behind in her hotel room? I suppose this is the magic of comic books.

I’ve missed Campbell’s art and design on this book, and I’m very glad she got to come back for this short. Her clean looks for the characters and thinking through what they are wearing with the situation and their personalities is always charming.

Misty is a great addition. I loved her rainbow hijab.

I guess that I hadn’t really realized that Clash and Blaze were actively dating. It seemed like a thing of the past previously. When Campbell has them kiss, I love the care she takes to show their personalities and their different body types in how they are position in the scene.

Roll with It by Kate Leth
Art: Tana Ford

I wanted to like this. I really did. I actually want more stories where there’s just downtime and also stories where Jerrica deals with having to be the one in charge all the time. This just wasn’t it.

Playing D&D felt more wishful thinking on Leth’s part than true to Jem and the Holograms. Kimber is a little nerdy in her kigurumi, but they don’t really come off as D&D being their thing. Maybe it would’ve been better if instead of Synergy creating their characters, if they found old character sheets from when their dad was still alive and they were kids, when say he DM’d for them.

What I’m saying is that I needed more layers.

Ford’s art wasn’t my favorite. I guess it fit a certain type of fantasy look, but wasn’t working well for me.

Jem and the Holograms: Dimensions #2

Maybe I’m not a huge karaoke fan. Though Clash certainly deserved to win the contest. She got the entire spirit of karaoke right. It’s about passion and enthusiasm, not perfect singing due to being a professional, or it being music you wrote.

The moves that the Holograms took to distract the Misfits were cute. The bagels in particular. They are nummy.

It was interesting to see the fan and artists dynamic, and also the other characters populating the outside of this sometimes so small world.

I love Shana a lot, and I’m so glad that she got her own story in this miniseries. It’s a lot to juggle two passions/careers, but she can definitely do it. She’s got her sisters and her model/friend Andre supporting her.

Of course, Shana gets sick at the very worst time. That’s how it always goes. This story felt very relatable compared to a lot of Jem adventures, which have a touch of the fantastic. Even if there were holograms here too.

Loved Shana’s friendship with Andre, and how they express the love and respect they have for each other and their craft. Their scenes together were touching.

Searle’s art perfectly accompanied the story. I loved the balance she took to show off the fashions first because they were the heart of the story.

Jem and the Holograms: Dimensions #3

Meh. Between reading this and reviewing this, I’d actually forgotten what the story was even about. I mean, it’s cute that Jem and the Holograms take time to mentor teenagers who want to be rock stars too. It’s very them.

But it’s also not very interesting, and this story didn’t change that feeling for me. I am glad that the kids got nervous and that they bombed, because otherwise, this would’ve been the most unbelievable Jem story. And they’ve gone to alternative universes and space.

I really wanted to like this story more. It had lots of elements to like, and yes, from a PR standpoint, this was a brilliant move from their publicists and record label. Like stroke of genius, especially after the reality TV show.

However, this short suffered from too many characters. Especially since Maggs had each of them have a moment — or a moment in pairs — to show their characters and how they would react to ghosts, the possibility of ghosts, or the notation that it’s all made up. It was just too much time.

Stott’s art made everyone either vaguely look like some version of Kate McKinnon and Melissa McCarthy in Ghostbusters. Which made for distracting art.

I also hated what Blaze was wearing. What are those clothes? Who would let her out of the house to buy ice cream at the grocery store in that much less go on a reality TV show?