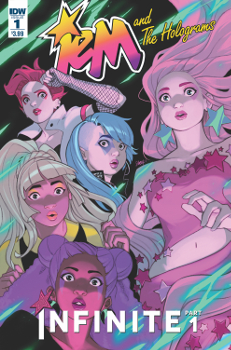 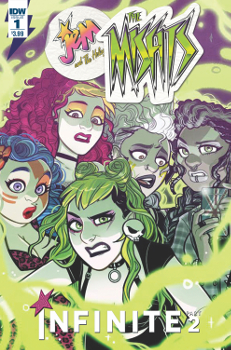 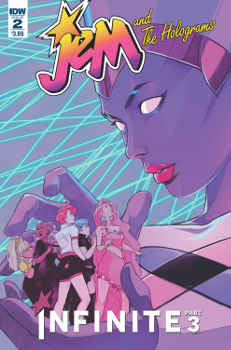 I’m curious why IDW chose to put two artists on this book. Is there a rush? I’m sad because I expected more of IDW publications than this.

I will say that I’m very tired of the bickering between the two bands. I feel like Stormer in these moments. Like get over it. Both of them now have found success in their own ways, and Aja’s injuries due to the falling lights is only mentioned in the heat of the moment.

Lee’s and Hickman’s art was a bit of a rocky blend. They at least had some basic agreements on styles for each character. Lee has clean lines like the cartoon, and Hickman’s are rougher. Neither style is bad, just not as complimentary as perhaps intended. I do, in this book, have a preference for cleaner lines.

It’ll be interesting to see Technorat redeem themselves. I’m also all-board shaking up this book with some saving of the universe with Synergy’s technology. The Misfits will not be left behind.

There are elements of this that are intriguing. First, the reveal that this Technorat is from an alternate universe (which makes sense). Second, that we might get to meet Emmett Benton (the dad). Third, that we get to explore what Synergy’s technology could bring if released into the public. Who is not surprised that it became a society definer along the lines of the rich and the poor.

And, of course, there is a wall.

There’s still too much fighting between the Holograms and the Misfits. It’s kind of getting old. I get Pizzazz is supposed to have a fiery temper, but jesus, there’s plenty of things to get upset about. Like the Misfits not being part of the rich world. Which, at least with Pizzazz, that seems odd since she does come from a wealthy family.

The hologram fashion wasn’t a hit for me. I don’t understand how it will disguise them. Blend in, yes. Except that the Holograms are famous in this world.

I’m still not sure why I’m not feeling these comic books, but they aren’t hitting me emotionally. I’m not worried about the stakes. They will be fine. Everything will be fine in the end. They will be at square one. Maybe the whole continuing conflict between the Holograms and the Misfits seems to signal that possibly editorially they aren’t being allowed to grow in order to keep the tension.

I did love the moment where Rio sees through Jerrica’s disguise and literally calls out that they are just glasses. Rio gets his Clark Kent is Superman call-out.

When the girls meet their father, emotions are there, but they didn’t hit me. It felt off-key. The art, the reactions, etc., as if the women had years of therapy to work out what they would feel by seeing their father alive and accepting that he was the alternative version so they couldn’t get too attached.

And then the symmetry and goodness of the Holograms in any universe was too convenient. It would be more interesting if they had to confront versions of themselves, who maybe weren’t black hat evil, but at least corrupted by money and fame.

I just kind of expected more.

Silica is a bad idea. I do want to know who’s in that room. Maybe Jerrica is still alive. There has to be some happy note for Emmett after they stop Eric and Jemcorp.