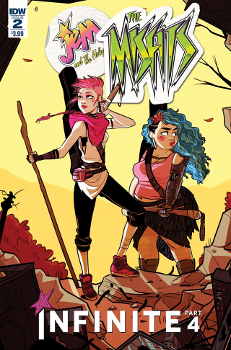 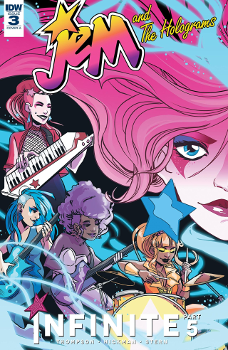 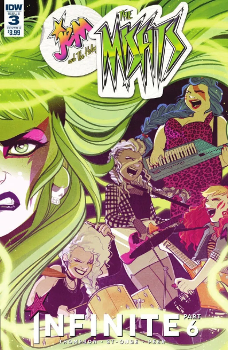 This was probably my favorite issue in this miniseries so far. The emotions, they were there. I’m also a huge fan of St-Onge’s art, and her character design is always a delight.

I’m not surprised to find out, at least one of the Holograms, Kimber survived. Her and Stormer making their music together was just lovely. Especially that it was a newer Misfits’ song, just with different lyrics and some musical changes.

Of course, alternative universe Pizzazz led the rebellion against hologram technology. While she did something good, she did it for the wrong reasons. Pizzazz never quite seems to learn that lesson. (Relatedly, been thinking a lot about ethics due to watching The Good Place.)

Love the two Stormers meeting. They are so natural with each other.

Then the inevitable call from Jerrica that they have to get back over the wall and into the city as the Holograms need more help. Even if this world outside the wall seems more intriguing, and we’ve had more emotional impact here. Also, it seems too easy to cross over the wall given the big lecture before by Technorat.

The emotional beats here when Emmett gets the news that Kimber (and Stormer) survived in his universe was what I wanted from Part 3. This is a satisfying reunion. And there’s genuine happiness that when this is all over, he won’t have to say goodbye to all his daughters and be alone again.

I felt a little too bummed when Jerrica tells Rio who she really is, and they both lament their inability to be together in either universe. (Of course, this Rio has it worse off.)

I should have guessed it was Pizzazz in that room. However, I was kind of hoping it was evil Jerrica. I think that might’ve made a better twist. Unless ultimately Pizzazz needs to look into a mirror of herself to change her attitudes about the Holograms. If this is what happens, I will be plenty pleased by the outcomes.

Infinite Pizzazz’s outfit looks like she should be married to Sting’s character from Dune.

The conclusion of this should go rather smoothly given that Emmett and Technorat were able to get Synergy back to herself using Silica as a backdoor. Eric and Pizzazz will be the only true obstacles for the final issue.

I’m incredibly disappointed by Jemcorp Pizzazz continuing to be a secret. Though I have a suspicion that she and Eric will sneak to the other world. Making two evil Erics.

That said, there would’ve been way too much to wrap up in one issue.

It seemed weird to me that the Holograms offered Emmett the chance to come back with them, when they knew that Kimber and Stormer were still alive in Infinite land. Like how incredibly insensitive of them.

This version of Elise may be my favorite. She’s so practical and also nonchalant about everything. She knows she just saved their butts and humanity’s. Just another day in the life of Elise. St-Onge’s design of her fit her personality to a T.

I was okay with the lampshading that Pizzazz still hated the Holograms. Though even Roxy and Jetta want her to get over it. And no one wants Jemcorp. It would’ve been nice to see Jerrica address a little bit more of her personality dissociation and also how it feels that no one believes at all that she could be Jem before they witness the change.

Raya, Shanna, and Blaze were completely wasted in this miniseries. Aja was almost wasted here too. Except that the concert was her bad idea.