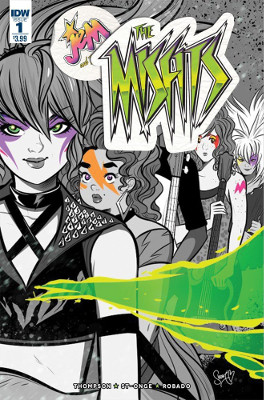 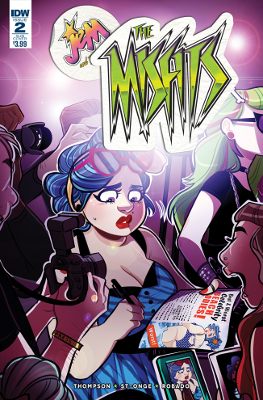 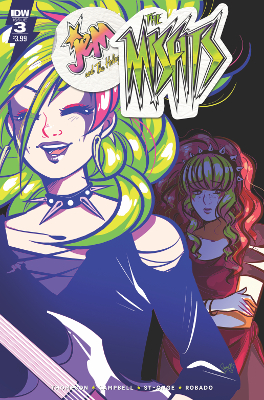 I get that IDW didn’t want you to feel like you had to read both this and the Jem and the Holograms book, so there wasn’t a “read this in this order” situation. However, I kind of don’t think anyone reading this miniseries wouldn’t also be reading the main series. I ended up finishing Jem and the Holograms before starting on this. The only thing I missed was that the Misfits were doing a reality TV show, which is only a minor plot point, and easily explained.

The origin story of how the Misfits met was great. I’d expected Roxy and Jetta to know each other pre-band, but it turned out that Roxy just fell in best friend love with Jetta the first time they meet her and she’s yelling at some punk guy, who’s running the other way from Jetta.

It always makes sense that Stormer was the first to join. I don’t know if she would’ve been onboard had Roxy and Jetta already shown their personalities first, and Pizzazz was a little cooler headed back in the day.

I appreciate Thompson continuing to explore Pizzazz as a person. Not just as the villain and foil for Jerrica/Jem.

Seeing Clash as the not!Starbucks employee was too great. Of course, she just took charge and Pizzazz hired her on the spot.

This story was cute, but it didn’t quite move me. I don’t know if I’d be invested enough to continue if I hadn’t read those other Jem comics.

I enjoyed St-Onge’s pencils, and I’m glad to see her getting work in comics as she’s a great artist. This is a story where facial expressions are super important, and St-Onge knows how to bring it.

We’ve seen mostly two sides of Stormer: Stormer in love with Kimber and Stormer the peacemaker between the two bands. But this issue really lets Stormer shine on her own. For the first time, Stromer vocalizes who she is, and she doesn’t take any prisoners.

Thompson also does a wonderful job at making it natural to the plot. Of course, if they were shooting a reality TV show, the sponsors would want some kind of weight loss storyline to pitch weight loss products. We don’t hear Stormer’s voice as an after school special or PSA because a fan called her fat. (Though we do have plenty of fans and randos on social media calling out her weight.) Instead, Stormer takes charge of the narrative.

We see another side of Pizzazz here. She is truly Stormer’s friend, and has always seen something inside of Stormer that perhaps others haven’t. We, the reader, do approve of Pizzazz launching herself off the stage, beating the crap out of the guy who called Stomer a whale, and then her going to jail for it. Pizzazz’s other acts of violence have always been about her own ego. They were always about her pride, jealousy, and fears. However, here, it’s about her loyalty and love for her friend and bandmate Stormer.

I also like how Pizzazz saved the best room for Stormer, and she tells Stormer this before we find out more about why Stormer didn’t want to sign the reality TV show contract.

Hopefully Stormer will continue to be able to turn the narrative.

First, I love that Thompson brought Campbell (who did the art for like half the Jem books that kicked off the series) to help write this issue. Great to see Campbell given writing credits, not just thanked as a consultant or her advice asked for free. A transwoman herself, Campbell was, after all, instrumental in helping shape Blaze as an trans character.

Blaze’s obsession with Luna Dark reminds me of all those female musicians I’ve loved deeply and dearly. The ones who made me feel like I can live my own path. And those musicians who make you swoony.

I love that Blaze accidentally meets Luna at a grocery store where she gives her advice. I also bet that those reality TV producers were sad they let Blaze out of their sight.

Of course, Pizzazz is supportive of Blaze living her dreams of fronting her own band. All the hugging. Almost every single working musician I know is in multiple bands and has tons different gigs. And the Lunas were very right that the TV show publicity works in their favor.