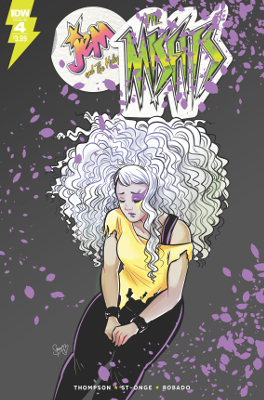 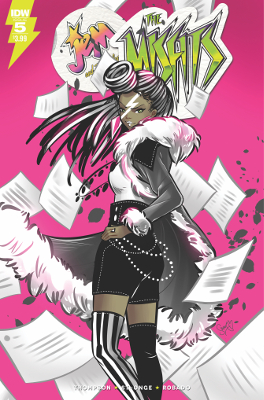 Outside of issue #1, I felt this was a weaker installment. In all the other stories, we learned new things about the characters we didn’t know before. We’ve known for a long time Roxy is illiterate. The most interesting things about this story were the other things we find out about Roxy, not the part about reading.

Which, by the way, I 100% agree with Jetta’s asserting that Roxy having to work around that and mostly successfully doing so for all these years shows how smart she is. My great-grandfather was illiterate, but did incredible things his life regardless and was known for his charisma and being the life of the party.

But I’m getting ahead of myself. I did love the scenes with Roxy and her dad. You can tell how much he does care for her. And now we know her love of drumming is tied to the memory of her father. And you understand their closeness because (while it takes her years) she does open up to him about her inability to read.

Of course, her father dies not long after that conversation. She goes to live with her aunt, who was not a fan of her father, and then she runs away.

Roxy’s fist-a-cuffs attitude is defensive. She’s always worried someone’s going to find out her secret, which relates to this deep hurt of feeling stupid compared to others. And she’s worried that the reality TV crew will find out.

Which they almost put it all together before Jetta shuts them down.

I do think Roxy’s story could be as powerful as Stormer taking on fat shamers. And I kind of wish this had the same type of resolution. Especially since both Stormer and Blaze take their issues to the front of their storylines and to the viewers of the reality TV show.

I had some feelings about Jetta’s story. In that I do not find it believable at all. I don’t believe she could’ve just run away and completely reinvented herself so easily. I just don’t buy it.

I also felt like the introduction where the rest of the band’s being swarmed by the paparazzi and media didn’t make any sense. You think Jetta committed a crime. Or that she did something so terrible in her past that the media just wants to know more.

She doesn’t. Jetta just lied about who she was as a kid and where she was original from (the South, not London).

Like Roxy, she was raised by a single parent who died too young and then went to live with an auntie, who wasn’t exactly the greatest. Then she run away and changed her name. It’s vanity that makes Sheila Burns not want to admit her birth name is Prudence. Not to be a total hater, I did love that her mom called her Jetta and that’s why she goes by it.

As the final mystery, this felt lackluster. Not to mention, we have a bow at the end with the Misfits’ new single going great, a new album in the works, and now their own record label.