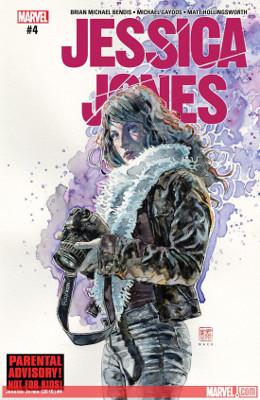 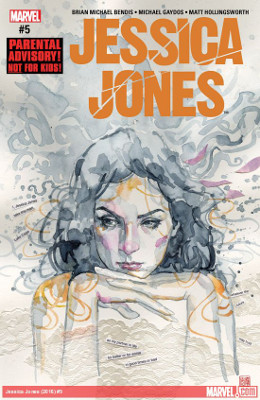 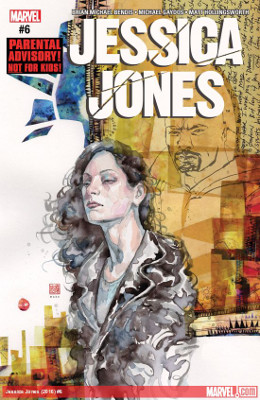 So…this entire plot is JUST KIDDING! JESSICA STILL LOVES HER BABY AND LUKE! Even if Luke doesn’t think that. Even if she’s lost a bunch of friends over this. Even if everyone thinks she went to jail because she became a villain. Or at least embraced the gray side.

And this weird crap about Luke and Misty hooking up. Dumb gossip. Dumb gossip that seems like more of a tie-in to the Netflix series than anything else.

Normally, I’m a big fan of Gaydos’ art. But it’s clear in the scenes with Carol that he doesn’t know how to draw short hair on a woman. The thing about Carol’s hair is that her hair is typically styled more like a man’s for simplicity. Here Gaydos just looks like he’s drawing a woman with a hidden ponytail. I want to see the back of Carol’s head.

Oh, you say Alison Greene is tied to Hydra? What? I never would’ve guessed from the cover on issue 3.

So I thought this couldn’t get any worse, but it did! Bendis is so absorbed into his own tie-in, crossover comics that Jessica Jones‘s plot is now intertwined.

As a fan of the original Alias series, one of the brilliant parts about it was how it was self-contained. How you didn’t need a bunch of knowledge about the MCU to understand what was going on. Not so much with this comic book. I have no idea about this destruction of the multiverse to have the MCU 616. (I assume this is what happened based on what we see here.) I’m not sure which universe the original Alias comic fits in and what’s canon for Jessica.

I feel like if it were any other writer besides Bendis that an editor would’ve pointed this out.

Apparently, Jessica’s so embroiled that she’s going to at least pretend (or maybe not pretend) to cooperate with Hydra (NAZI!) agent Alison Greene.

I fucking hate Marvel writers who think that making otherwise good superheroes somehow going bad and working with Nazis is a cool plot.

It was a double-fake out, so wasn’t that cool. But Captain Marvel did destroy a bunch of universes with some other heroes. Also Danny thought his best friend was macking on his lady so Luke and he had to pull out some penii. And Luke is never going to forgive Jessica no matter what anyone says.

The only good scene was the one where Jewel and Ms. Marvel meet and Jewel called Doc Oc an asshole.