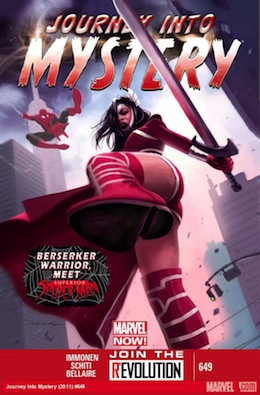 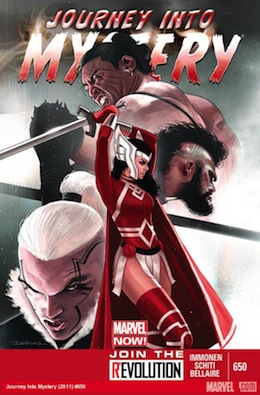 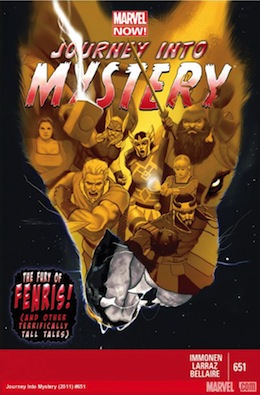 Love Sif as the leader of the Berzerkers and how she won’t put up with any shit. And how they don’t know about how NYC functions.

It’s also pretty cute how they all kind of sad that the other superheros have defeated the other major evils. I guess that the crisis wasn’t as bad as previous thought.

Yep, all signs point toward Oklahoma. Sif isn’t very happy with her brother, Heimdall. Dang. I think that there’s going to be more trouble on the rainbow happening without its guard.

I’m a big fan of Aerndis having never cast a Berserker spell on Sif and that’s just how Sif is. Or just what she needed to express in herself at that moment. Also funny that Aerndis went behind Heimdall’s back to open the bifrost for Sif and crew.

Out of Einhar, Bovar, and Svip, it doesn’t surprise me that Svip couldn’t adjust to civilian life. He didn’t see the joy in pizza, and in the end, he was as much of a monster as the monsters he spent his time fighting. Of course, luckily for Sif, she could see this without becoming a monster herself.

They also took out the big bad that Aerndis and Heimdall were so worried about pretty easily.

The art with Sif carrying all the pizzas is pretty hilarious. And I enjoyed the art of the snowball fight the end almost as much as the writing of the scene. Cute.

Loved this short story about Hilde and her adventure with Hati, the Hel dog, and finding the dwarves causing trouble with the wolf, Fenris. The premise of it as a tale that Volstagg was sharing with his other children worked really well.

The tale was cute, especially as all the warriors went to fight in their PJs. And Sif and Thor got caught in some post-breakup, post-coital snuggles. (This is a comic book for teens after all.)

I liked the bright colors, and the spirit of this wacky world where you can just take your dog out for a late walk and run into a lot of trouble. Fun.

Sif is the best, you should buy Journey Into Mystery Volume 1: Stronger Than Monsters