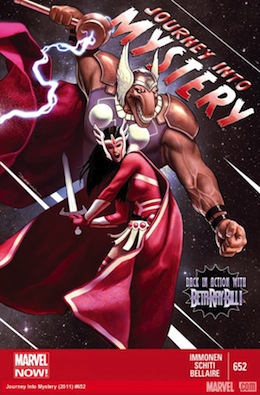 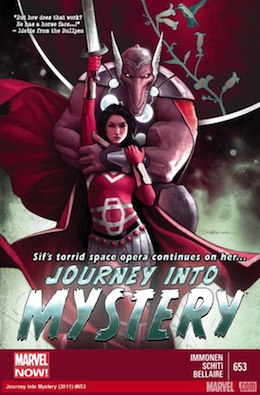 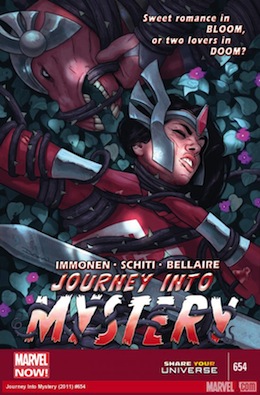 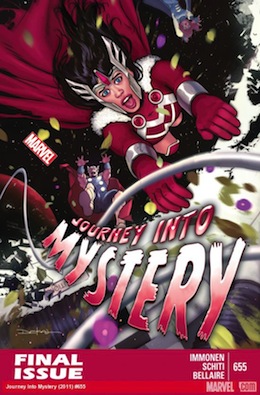 I appreciate that this book is really rather one comedy of errors about a fish-out-of-water. And in this issue, Immonen sends Sif pretty far out, to the moons of Jupiter.

It’s hard to care about the danger to Mother Gaea and the threat the All-Mother given that it’s not being played like a high-stakes game. Clearly, they want to find out what’s wrong with Gaea, but it’s not what Journey Into Mystery is actually about.

I love that Schiti draws Gaea as much taller than the very tall Sif.

Sif bringing in Jane Foster to look at Gaea was brilliant. I love them talking about Thor. That’s pretty much every person’s worst nightmare, their exes comparing notes. (I’ve done that before with exes of my former partners, and let’s just say I won’t repeat what was said.)

Sif being in space by herself is pretty entertaining, especially given Tony’s warning about finding any of his random tech. But I’m super excited about the addition of Beta Ray Bill. He’s kind of rad.

Not really feeling this forgetting thing. Same with Ti Asha Ra’s death and Skuttlebutt’s apparent non-existence. I’m kind of wondering if Gaea won’t end up fixing everything once she’s better. I can’t tell if it’s good news or bad news for Sif that Gaea’s found her away into Sif’s head.

Usually I appreciate Beta Ray Bill for the laughs he brings. But there’s some super seriousness happening right now.

I did really love Schiti’s images of Sif jumping through Gaea’s garden in search for Ti Asha Ra and Immonen’s direction on how Sif would react to her death. Advanced technology can’t save everyone.

I’m not totally in love with this plot right now. Mostly because it doesn’t surprise me that it’s really all being caused by Tony Stark’s technology: both on the space station and what he built Asgardia from. Plus, Beta Ray Bill and Sif seem ill-equipped to solve the mystery themselves.

Though they can probably fight the 50 foot tall Gaea. They do know how to go about that.

I hope they are able to separate Ti Asha Ra and Skuttlebutt in a meaningful manner.

I don’t think I mentioned this before, but I’m really digging the jumpsuit that Sif’s wearing. I’d totally wear a fashion version of it or perhaps a swimsuit modeled on it. I really like when female characters wear things that I can actually image women wearing in real life.

I’m really sad that this is Journey Into Mystery‘s last issue. It’s really become one of the series that I look forward to most every month.

Poor Beta Ray Bill and his realization that he’s not in love with Ti Asha Ra. The guy did seem a little bit less sad when it was revealed that she wasn’t dead. I have this feeling that we might’ve found out more about this revelation had Immonen been given a few more issues. And that perhaps he does love her now. Or their second chance to be together.

Loved that they all work together with their goodness to fix what’s going on with Gaea. Seems like the perfect ending. Even for some smash-and-bash characters.

Though, of course, Sif won’t be gardening anytime soon still.