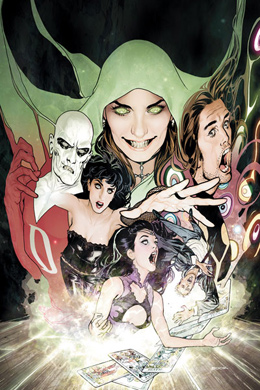 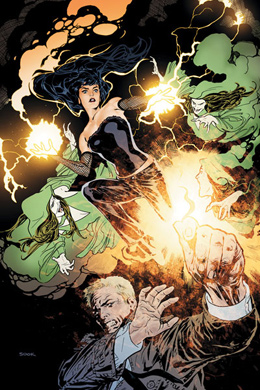 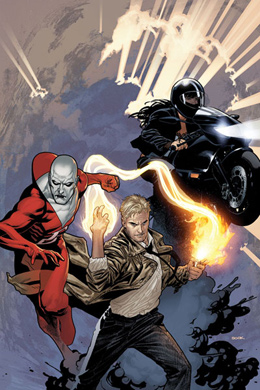 This title wasn’t too impressive. I don’t know if it’s because most of the characters I am not very familiar with. My major draws for picking up this title were Zatanna and Madame Xanadu.

I’m not fond of the recreations of either of those women’s costumes. The boob window is stupid on Power Girl’s costume, but even more stupid on Madame Xanadu’s outfit. And on the cover, she looks so pissed off about her new outfit that she’s ripped the hole in it just by the force of will and her boobs. Zatanna looks like a club kid who’s trying to be all goth.

I don’t know anything about June Moone so I feel like I can’t comment on how she was being treated. Same with Enchantress. But I can say that I’m not overly fond of plots where women-are-crazy.

The teeth thing wrapping around Superman and Wonder Woman was just creepy. Though I loved Zatanna knocking out Batman so she could go on the mission. Anytime anyone pulls one over on Batman, that’s a win.

Shade and his imaginary, but conscious of her being, girlfriend Kathy was just a downright nasty feeling. Like Kathy was only good while he could use her, and without him, she didn’t exist. Just another strike against women in this book.

I am interested to see John Constantine and Zatanna’s interactions together. There seems to be more to it.

I’m going to give this title about three issues before I make my final decision on if I’m going to keep reading Justice League Dark.

Wow, this issue is so much better than the first one. Milligan’s finally talking about the characters through the story and using their powers in such a better way than before. This issue was like a fresh breath of air compared to the last one.

Okay, I was totally not expecting that ending with Madame Xanadu telling Enchantress that she’ll give her the names of all her enemies. All the mystical ones who are assembling to fight the Enchantress. (But what does this mean for Madame Xanadu’s and Shade’s conversation last issue?) Does this mean we only have one good woman on the team? Unless Dove is officially going to be part of this. Which I approve of, especially since there was no way in hell I was picking up the Hawk and Dove book.

I thought that the people in the street thinking Zatanna was dead was pretty hilarious.

The entire plotline with Deadman and Dove was great. Dawn’s correct, so creepy, and she rightly walked away when he inhabited June’s body. (I’m glad that they explained that June is just a random character for the plot, not someone that I thought I should know.) I also loved their snark and how they clearly care about each other, even if Deadman is kind of a douche.

I’m just not getting this storyline. It’s not grabbing me, and frankly, it’s kind of incomprehensible. I feel like a large part is that I don’t know all the characters and their backgrounds. Which doesn’t tell me that this is a book for new readers, and it’s telling me that this is a comic I’m removing off my pull list.

The swirly portals didn’t help. Swirly portals from all directions from the Enchantress and from Shade. The story felt a little cut in half due to them.

Last issue, I cared about June. But this issue, I’m rather don’t. I really had high hopes for this book, and they just didn’t pan out.