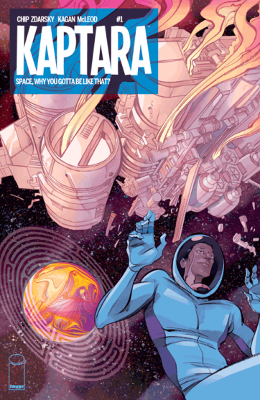 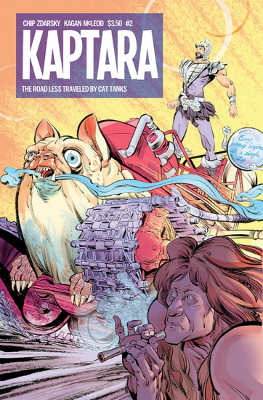 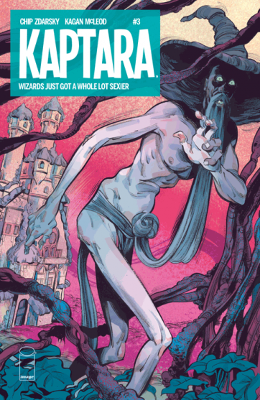 This book is definitely over-the-top. Not that I would expect any less from Zdarsky. That is his way.

Keith wanted adventure, and that’s definitely what he got. More than he bargained for. I did appreciate that no matter how selfish we see him, he does get truly upset — and not just for his safety — when Lance dies in Murder Forest.

But not too much when he wakes up to find himself immersed in a Flash Gordon-y, pulp novel-style world. I do hope that Zdarsky continues to pull punches and subvert the genre as he goes forward.

I do wonder what happened to Laurette and Samantha.

Oh, Keith. He thought he was having way too much fun on Kaptara and being taken care of. Instead, they were teaching him a lesson about how to care about his planet. I love how he considers Manton to be the only person who actually cared about him. It’s sad, but tells so much about his character.

And Keith continues to try to get laid all the time.

There definitely needs to be more Villektra. Especially her slapping minions. She can slap them all day. I love how Skullthor is actually on his way to Earth due to an accident, not on purpose. I love that Villektra doesn’t want to be ruler because she doesn’t want to deal with stupid people.

Dartor is obnoxious, but seems to work so far for the storyline. Especially that he’s the queen’s son and no one listens to him. Especially Motivational Orb. Love that Manton makes the joke to the Queen that if he loses Dartor, he’ll find her another son.

Mr. Help is the worst, but ends up making Keith feel really bad when he finds a photo of Lance and his happy family. The family that they think Skullthor’s heading to Earth to destroy.

You’d think She-La would’ve figured out they were surrounded before she got captured. Of course, everyone’s heard of Keith by now.

OMG, I thought I was going to explode with glee from reading this issue. Oh, Zdarsky’s thinly veiled satire about the Glomps being internet trolls. Like incredibly not veiled, but so well done. Especially since they aren’t at any point given moments for redemption.

Manton explaining that they were expelled from regular society because of their sexism and racism. Then Dartor making fun of them for all the women abandoning them and them only being able to share “sexy” drawings of women between all the straight male Glomps. And finally, Keith explaining to Melvon how he doesn’t need to destroy the Glomps because they will die out of existence on their own.

Melvon is a pretty wacky character. On one hand, a cranky old grandpa wizard pissed off at the forest bros, aka Glomps. On the other hand, completely ripped and a great fighter. Also wizards probably live a long time.

Villektra remains the best. She’s ready to take over the Dark Boroughs permanently. This book continues to be utterly ridiculous. Which is part of why I love it.