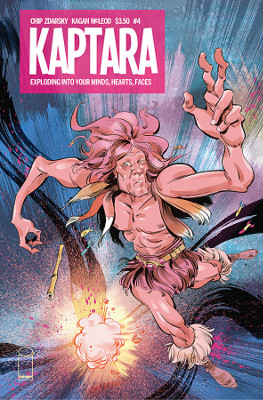 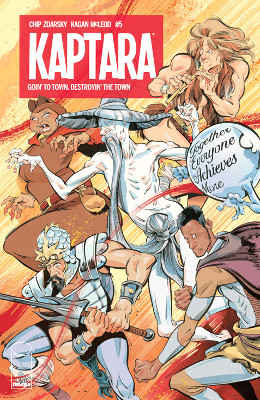 This was my least favorite issue so far. Mostly because I don’t care anything about Dartor or the trouble he finds himself in. It’s almost like a kneejerk compared to the last issue, which was way more layered and thoughtful. I think we already could’ve guessed that Dartor gets himself into trouble — doesn’t understand how or why — and somehow get himself out of it by sheer luck and stupidity.

Laurette being alive is the best. And it’s cool that she found a society that took her in. Plus, they gave her some fun wings and a costume to look like them. They even have a way to get everyone to Earth! (And then Dartor went and killed most of them or started a war, if there are any left.)

I didn’t like Dartor’s night on the town with the King of the Six Sides really turned into a “boys will be boys.” Yes, Prince Zax died, but we readers don’t care about him and saw it coming. Then Dartor getting away from his death sentence further enforced no consequences on the boys night out.

This book quickly gets back on track with explaining just what Dartor did and didn’t do to the bug people. He didn’t poison them! It was a plot by someone else who wanted a democracy instead of a monarchy. However, as always, there was no time for anyone to explain anything to each other before they were scheduled to kill Dartor and also the Fire Storms came. Such excitement in this book.

The colony collapse seemed absurd; though the bugs being able to be killed so quickly is a theme. Which even Manton runs away from. Though technically, it was only half their faults.

Manton and Keith enjoying the Optic Winds together was sweet. I hope there’s more of it. I approve of this ship if that’s where Zdarsky and Kagan are going.

My one disappointment in this issue was that Kagan didn’t draw as many butts as usual. That’s right, this is twice now that I’ve complained about not enough butts in comics recently. (Dick Grayson’s appearance in Midnighter being the other.) In the past, it’s been the other way around; I’m loving this intersectional butt-representation future we’re living in!

That said, the two-page spread of villains Kagan drew was incredible. I spent a good 5 minutes or more studying each character because so much personality and work was put into them.