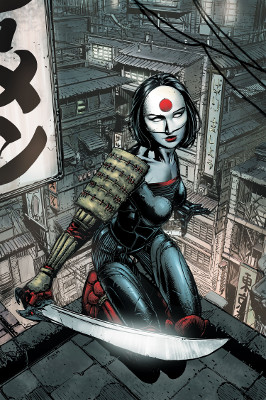 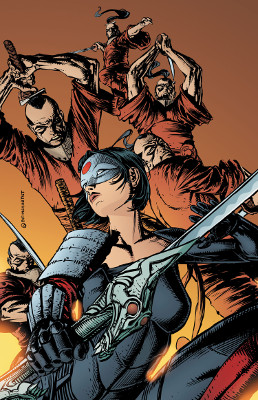 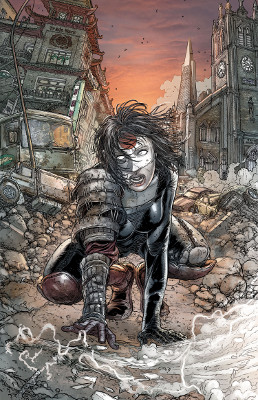 This book’s definitely interesting. Both the tone and the art are a lot different than the rest of the DCU titles. Which I have been complaining that with few exceptions — Batwoman and the art in Wonder Woman — DC’s been sorely uninventive lately. Though this art feels very ’80s, very much like other Nocenti books from long ago.

Mack Yackey’s color palette of pinks and purples gives it a surprisingly, dare I say, girlish tint. With lots and lots of sword fighting. Coil has an interesting sword too.

I haven’t really made any firm decisions about this book yet. The plot’s vaguely intriguing. I’m not sold on Katana’s obsession with her dead husband and the Soultaker sword. (I think it’s high time for flashbacks in order to actually make us understand and perhaps enjoy their relationship while they were both alive. Or at least make heads or tails about why Katana’s taken this path.)

I hope that we get to know more about the “ugly” girl.

I kind of like that Nocenti puts Katana’s lack of personality as her personality flaw. Or her purposeful ignorance of anything around her except her revenge.

The fight at the zoo was really overdrawn against Coil’s people. There were too many literal analogies. It got to be too much. Way too much.

Not sure how I feel about this whole thing with Sickle. Especially since there was a fight over Katana’s hand in marriage. I think we need to learn more about Katana and her husband and their relationship. It sounds like it might’ve been less than hearts and flowers.

I did like “Junko” and that he wasn’t a drunk like Katana thought. Her kicking candy to the side was a better analogy than any of the dialog.

I do hope that she frees Shun.

I’m not surprised that the soul sword was broken. And now I wonder what exactly is going to become of all those souls that are now free. Many of them are villains. At least the ones that Katana’s been killing.

Interesting that Katana’s learning to use the weapons of her enemies. She now has some mastery over that circle sword. Which looks super crazy to use.

I hope that Killer Croc’s used in a more intriguing way than he normally is.