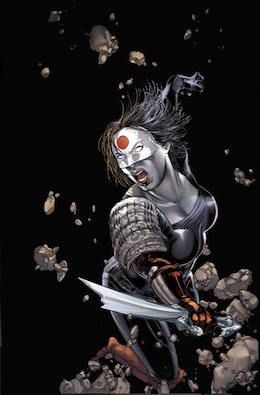 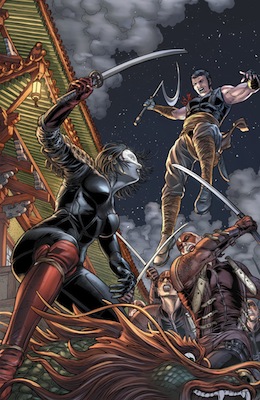 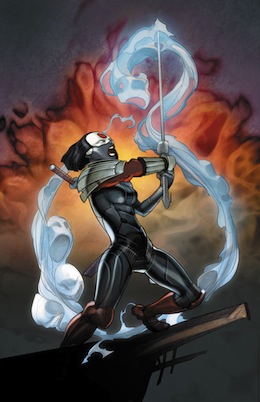 Creeper seems like a little bit of a literal name for this demon fellow. Seems like he figured out his form quickly, but it does sound as if he’s been released from the sword before. Which also means that someone has figured out how to reforge the sword and suck all the spirits back in.

Killer Croc and that Dragon are clearly up to no good. (Wonder how this factors, if at all, into the current Croc plots over in Batwoman.)

Maseo didn’t seem to want to stick around Katana for very long. Though it seems that some of these ghosts have her back.

Poor Shun. She seriously has the short end of the stick in life.

This book greatly improves when Sanchez draws it. He gets how to draw people of Japanese descent. When Richards picks up, Swagger looks like a blonde white model from LA, not a Japanese swordswoman who dyes her hair blonde. I seriously thought we were dealing with two different characters for a second.

On the other hand, everyone around Katana just seems to die. She seems to have a problem that perhaps she should fix before she goes enlisting the skills of others. Sickle, however, seems to be a bit in love with her and not in threat of death.

Not surprising to see Creeper show back up.

I’m still not feeling the Katana train. I don’t think Nocenti’s really hit her stride. And maybe there’s some editorial stuff happening considering apparently the Creeper’s getting his own book.

I’m happy to see Nocenti pointing out that it’s pretty creepy that Katana slept with her sword. Creepier than if it was just Maseo’s soul in that sword. There were thousands. And I’m good with the reforging of the sword not summoning all the souls back in it.

Even though love triangles aren’t my thing, I am curious to hear more about Maseo’s death and why Sickle’s still so obsessed with her.