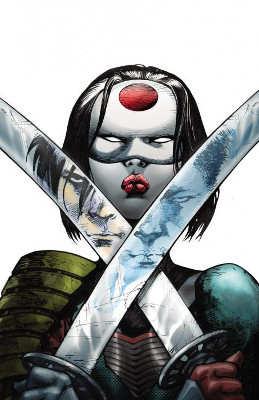 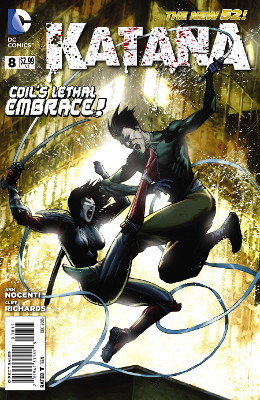 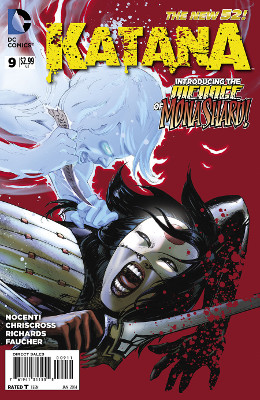 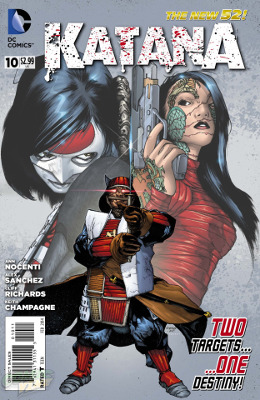 I’m glad that apparently we’re giving Shun a home that’s not under attack. But I hate to see Tatsu disincentivized to connect with others because their livelihoods are being destroyed due to their connection to her, namely Madam Yoko and Nori. I was kind of looking forward to these women, not just Junko, providing some life lessons for Tatsu.

Really I’m having a hard time keeping Sickle’s and Coil’s stories straight. Mostly, because their only real distinguishing feature is that one is trying to kill Tatsu and the other is not.

It’s nice to finally see the tale of Tatsu and Maseo. However, it seems like a terrible stereotype of the way that Japanese women should be and Japanese men get cuckolded. Or at least Sickle did and has been for a long time.

It does, however, make a lot of sense that Tatsu actually killed Maseo, and between that act and her sword’s voices, she went a little nuts.

I’m not sure how much I buy that Tatsu will bring the apocalypse.

With the addition of Shun to the cast, I’m feeling like this story’s becoming more coherent than it was before. Or maybe Coil’s long exposition helped clear up some of the details in my head. I kind of just want to see Shun and Tatsu have adventures around the world and Junko be their Alfred. Maybe Falcon can come along.

That said, for fighting Coil and getting wrapped up in his sword a few times, Tatsu has very shallow cuts and not as many as I’d think.

I’m seeing some conflict in killing Mona Shard, due to her liking to inhabit the bodies of children. And killing the guy in the sumo warrior’s body isn’t going to be easy either. But for a different reason.

The added clarity of the Outsiders vs the Swords vs the Daggers was useful. They were really starting to blend together. I mean, how many ninja and samurai gangs can Japantown have? Or at least the Japantown of the DCU.

I can’t say that I’m overly surprised that this book got canceled. The first couple issues were great, and let’s face it, the market still isn’t there for a relatively unknown female character to have a lead in a book. (Which is DC’s marketing teams’ fault.) But even a male character as unknown as Katana could have a hard time too. Katana has been on my list of might unsubscribes for a while.

I’m not a fan of the trope where a hero won’t kill a baddie because they’re a child. Especially if that hero kills people, which Katana does. I don’t see her battling this much of an eyelash at killing Mona Shard.

A bit surprised to see Tatsu actually sleep with Sickle though. Sure she had a crush on him years ago, but seems like that would be more unethical to her than killing Mona. It also seems that Nocenti describes Sickle as a bad boy more than shows him to be one. If anything, Nocenti’s shown Maeso to be more evil overtime.

On the other hand, I’m totally a huge fan of Shun buying herself a gun and getting some revenge.

Really, these are Shun’s final words in this series: “Your husband. He died for you again. I can’t imagine a man loving me that much.” Honestly, because a disfigured woman can’t have love? This is some body hate, abelist bullshit right there. And pining after men, after her last actions being shooting and then torturing Coil. Makes all the sense in the world.

Yeah, I figured that this book wouldn’t be wrapped up since all the endings would be like the Mad Samurai’s. Pretty boring.

Surprised to see the twist that Junko was a cop. Figured that might’ve come out sooner in the story. Also even if Katana’s been killing villains, I’m pretty sure murder is still illegal in Japantown. Just none of this really makes sense.