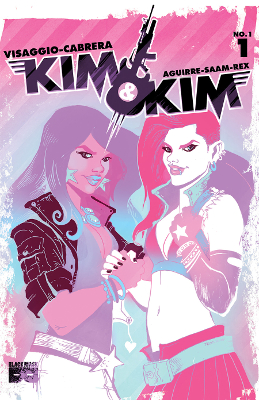 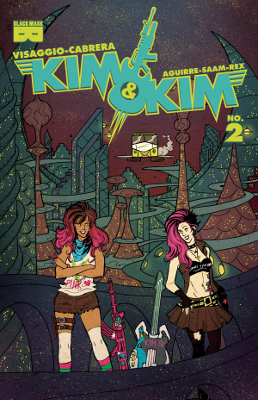 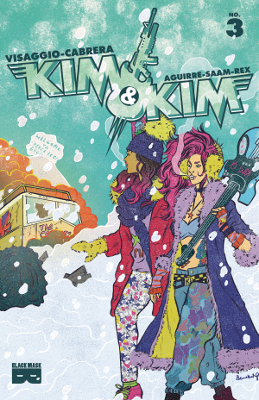 This issue was really solid and really fun. There’s so much potential and heart. This is exactly the fun — two space bounty hunters who are best friends with one bisexual and the other a transwoman — that was promised. It makes me so happy for all of us who are now seeing our stories in a comic book. (You know, minus the space travel stuff.)

Cabrera’s pencils are great. The colorist Claudia Aguirre really brought the story to life too. Everything had a wonderful feel and set the tone for so much of the tale.

Kim Q’s definitely my favorite for sure. With her loud ways, deep need of Kim D’s friendship, and her pink hair, she’s easy to like a lot. Plus, she’s out-in-the-open about the achilles’ heel of her father and his business. That said, looking forward to learning more about Kim D as this book progresses. (If we’d learned more about her, this book might’ve gotten five stars. It was super close, like 4.5.)

Of course, they accidentally capture Tom Quilt, who was their original target and is now wanted for so much more.

The addition of Columbus and Red make very nice foils to Kim and Kim. In this universe, everyone is pretty ridiculous. Which makes it so much fun. If only the queer women were ridiculous that wouldn’t be great.

Looking forward to more over-the-top tales of Kim and Kim.

I love how Tom has just given up and become their friend…kind of. Or at least, he’s more of a willing hostage than he was before.

Poor Kim Q and her father dead naming her. Even when Columbus and Red call Kim by her name and pronoun. I guess we now know why Kim doesn’t want to be part of her family’s business, despite having taken up independently the family trade.

Sandworms from hell are pretty hilarious. They seem to fit into the general chaos of Kim and Kim. I’m glad we now know more about Kim D. (Who interestingly I kind of like more in this issue than Kim Q. Probably because she’s much more levelheaded in that restaurant.) It’s also nice to see than neither Kim fits in with her family.

Djuna, aka Lady Babylon, seems like the best so far.

I kind of love that Lady Babylon is really no one and everyone. Also that Mina and Djuna have spent their lives hiding and rescuing polyforms. I hope that they were dating because that’s what it looked like. Though Visaggio and Cabrera do make platonic friendships between women very affectionate.

Normally, I’m terrified of gorillas. But I cannot figure out if I’m more or less scared if they are robotic. I think less.

I’m a little sad that we did not get to see the Purr-Monsters. This was disappointing. I was okay with the story skipping around. I was also okay with Tom just getting whisked away, and the women not really knowing what happened, but assuming everything was just fine.

Gretchen and Kathleen seem really awesome, and I hope that the Kims will take them up on their offers of support during future adventures.