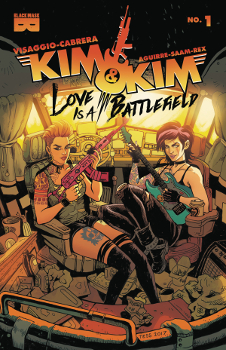 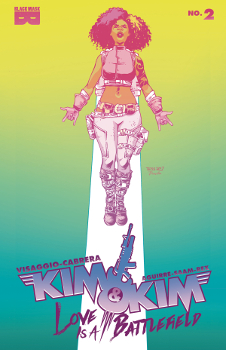 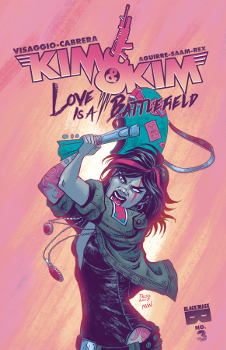 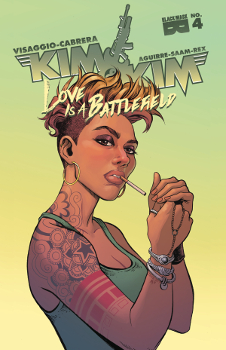 It’s been three years since we last saw our Kims. (At least, in comic book time anyway.) They are still messed up, broke, and always off-track. They actually end this issue more broke than they previously were.

The Kims actually get a decent bounty. Kim Q’s temper doesn’t ruin it for them. But then, of course, the ladies go to celebrate before they actually have put the check in the bank account. (This is mistake number: a lot. You don’t count on the money until it’s cleared and sitting in your account, freelancer.)

Poor Kim D. Laz does sound like the worst. Or at least someone that really knows how to push all of Kim D’s buttons and manipulate her. Who doesn’t flush the toilet? Kim Q is right about that one. Truly a sign of evil.

Kim Q has every single right to be super pissed at Kim D. Kim D has lost it over a girl. Over a shitty girl named Laz. While I cannot say that I ever didn’t lose it over someone I didn’t have closure with — and Kim D waking up in an empty bed five years ago is not closure — but this scheme is about more than making money.

However, I’m kind of shocked Kim Q never looked up Laz in the bounty database. Given how much she hates her and has been trying for years to convince Kim D that she’s toxic.

While it’s very true that Kim Q can handle herself, she’s right for being hurt by her best friend leaving her alone to fight for her life. (Or at least her ability to remain upright and still able to work.)

I did love the part with Kim D and her ancestors. Her grandma was great. I’m not sure I believe the giraffe was a major setup. But it might’ve been.

Though I don’t understand how you can turn in a bounty for money when you also have a bounty on your head.

This world is so capitalism gone all sorts of wrong.

As much as I love Kim & Kim, I think I finally figured out why this book is consistently either 3 or 4 stars for me instead of 5: it’s the plotting details. I want the little threads to mean more. I want the giraffe necklace to come back. I want more depth into Kim Q’s relationship with Saar. I want to see Kim D’s ancestors and her mom that we briefly saw last volume. I want the threads to also play into the world building.

Kim & Kim is incredibly fun. I recommend it to others. I love how shiny it is. I love how it’s not a sad queer story (as many of the essays in the extra material in the single issues speak to). It’s just always slightly misses the mark for me.

Kath and Gretchen are fun characters. I love that Kath wants to be a mercenary queen. I love how she contrasts sharply against the Kims in their pursuit of the same career path. I want them to stick around after this issue, but I don’t trust this book to do so.

Saar definitely has some feelings for Kim Q that she wasn’t expecting.

Laz is going to get hers.

All hail Kath, queen of mercenaries, and team kick-ass ladies. I can definitely get behind Kim and Kim joining her and Gretchen and kicking butt everywhere. Plus, we know that Kim and Kim can benefit from some structure.

It felt cathartic to have Kim D kick Laz’s butt. Laz deserved it. Even if there seemed to be untied up threads around the entire Laz situation and them running into her again, the emotional wrap up was nice.

Saar was always going to try to kiss Kim Q one more time. That’s boys for you. It felt perfectly right.

Loved that by the end of this miniseries, both Kims are trying to be a little more mature — at least when it comes to romance — than they were before.