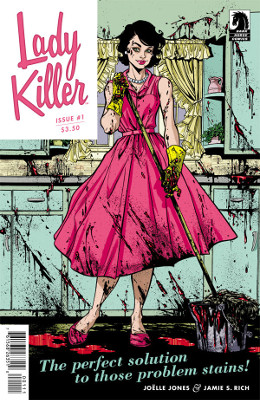 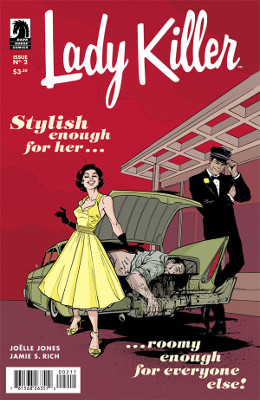 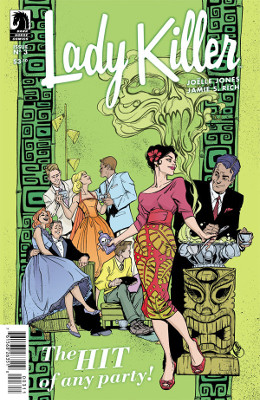 Totally dug this comic book a lot more than I expected. I wasn’t going to pick it up until I heard some very good reviews of it and discovered that it was by Jones. Yay for more comic books by ladies! Also Laura Allred on the colors is always an easy sell with me.

I love how Jones draws Josie Schuller and her world. It’s so 1950s and technicolor. It’s sickly cheerful, and it’s an interesting color choice to have the blood splatter more black than red. It makes it seem messier and in a “woman’s domain.”

The book definitely exaggerates a lot of stereotypes about women and a lot about the terrible ‘isms during the ’50s. (Josie’s daughters dressed as Indians both shows the era and how clueless the entire family is.) The major one is, of course, that women aren’t killers and aren’t threats to men’s safety. I’m really looking forward to Josie killing a man. Doris Romanov may have had some training, but she seemed to be out of circuit as it were.

Yeah Josie just might have to kill her mother-in-law.

Josie Schuller continues to be a lot of fun. She’s definitely a no-nonsense killer, but she does have a sense of style while she does it. I love her telling her target that she knows exactly who he is. He just doesn’t know who Josie is and that he’s guaranteed to lose.

I really like Josie’s antagonistic relationship with David Peck. How she doesn’t exactly trust him, and how she makes him seem like less of a professional compared to her. But good thing he’s around for body disposal.

Stenholm, on the other hand, brings the assassin gig to a serious note. He’s definitely threatening Josie’s family, which I have a feeling that she’s not going to take very well at the end of the day. He may be her next target.

Of course, Josie’s assigned target is a child.

Not entirely surprised that Josie didn’t kill the child. And then she feels that she’s gone soft.

Jones’ art showing Josie’s file with different photos from her life works so well to tell her story in a short space. She’s been killing since she was very young, but she’s also happily married — minus one nosey mother-in-law — and also happy with her work.

Not surprised that Stenholm sent Peck to kill Josie. Though I think he’s going to have just hard of a time killing her as she did that kid. And clearly, he’s okay with being a little bit irresponsible.

I wonder if Josie will have to come clean to her family to move them to safety with her. Not that her mother-in-law will believe her.