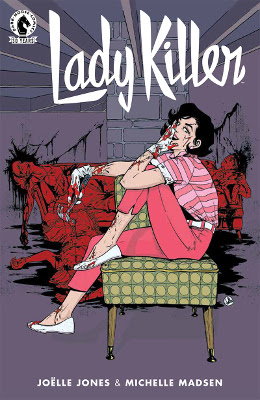 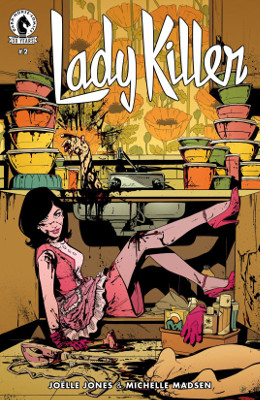 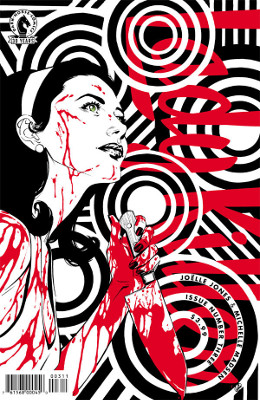 I like this Josie without an agency. Josie without a cleaner to take care of the murders she’s done. Josie who’s running her own business. I cannot wait until we learn more about it and how she operates. How would someone go about being an assassin for hire in the days before the internet?

Of course, I’m thinking about marketing and word-of-mouth recommendations.

The tupperware party cracked me up. So from the era, and then Josie using it to pack out the ladies’ bodies.

Josie is definitely going to have to take care of her mother-in-law sooner rather than later. Of course, there’s no way Gene would be currently convinced of Josie’s occupation. (I also want to know more about how Josie was trained.)

Somehow I think George might end up dead. I know I’d be hard pressed not to kill him even without an assassin mentality.

This book makes me so viscerally happy. The combination of Josie’s lady assassin gig, her poise, and Jones’ kick ass art is joyful.

Irving is a kick in his own right. While he certainly forces himself into Josie’s business, he doesn’t take over the business. Or take over her life, which is what I was afraid of. Her getting away from the agency gave her agency in her life.

Though Josie’s way too much of a classy lady for Florida as we can see by her suit.

I hope George ends up dead more than ever. Irving can help with that body.

Loved the details of the era from the bingo halls to the airport. Imagine trying to pull that airport job now. It’d never happen.

I do want all of Josie’s outfits. Though I don’t have the boobs to pull them off.

Just when you think that Josie has gotten a great partner who’s good at cleanup, which she hates. Wow, I did not see this issue coming. I suppose if you’re going to be realistic about the assassin industry post-WWII, there are going to be Nazis and others who did some real fucked up shit during very desperate times. Of course, even now days there are men like Irving, who promise desperate folks on the run a new place to go, and then actually kill and rob them.

I’ve long felt the mother-in-law was a rather underdeveloped character. Well, no longer! She’s a complicated person for sure, and not surprising to see a woman of her age in this era from Germany who was a Nazi. I was surprised that she slept with Irving in her spying. But I guess this shows her desperation to keep in the good graces of her bosses, who she was both scared of and complicit with.

Jones does a fabulous job here with the layouts in particular as we change from Josie’s domestic space, her killings, and her mother-in-law’s backstory. The art remains top-notch on this book. It alone wins me over, again and again.

I called it that someone would kill Gene. Of course, the question remains if Irving did do it for Josie or if he did it to entrap Josie so she cannot get rid of him.