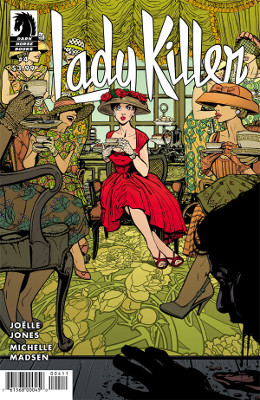 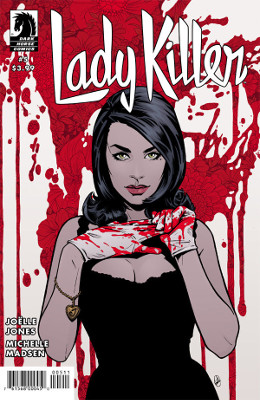 Irving is the worst. You never hurt a dog. What did the dog ever do to you? I’m glad that it wasn’t killed outright.

I do wonder if the mother-in-law isn’t going to become the new wetworks.

Of course, Eugene is the number one suspect in his boss’ murder. Irving knew that would happen. There’s more than one reason he shoved the man’s body in Josie’s chest freezer. I do have to say that I’m surprised this is the first time that Josie’s killing has threatened to lead back to her husband. Certainly in this era, it would be easier for the cops to believe her husband was a secret assassin over her.

Irving also got her almost caught with those strippers. I loved the sexy, deadly determination of Josie and her sparkles. So great.

Jones’ art is masterful here. The layouts. The lines. The movement. This is top-notch work from an incredible artist. Everything is put to use as Josie outruns, outsmarts, and ultimately kills Irving.

It turns out Gene cannot handle the secrets of the women in his life. He has always assumed the best, and he’s not wrong that perhaps Josie’s job means she shouldn’t be around the kids. Josie’s mother’s lesson for her, wow. Not exactly a parenting model, and I do wonder if Josie wanted to train her daughters or had any inkling that way. It feels right that Josie and Greta are left with each other.

Of course, Irving remembered Greta. I suppose it made sense that Greta was injured in the fight. She hasn’t exactly been keeping up with her fitness. But we do see how Josie cares for Greta by hiding her in the cupboard.

Irving’s continued ability to fight back in an effective manner and keep living was a tad unbelievable. Not only was he gravely injured multiple times, but he is an old man. No matter what kind of shape he was in, those injuries would’ve taken a deep toll. Of course, he was sustained on his lust for violence and death.

I’m not sure how I feel about it being Gene whose shotgun finally killed Irving. It would’ve been better for Josie to save herself. Or for Greta to have come out. But it does serve to give Gene further reasons to leave Josie. Especially when he vomits, and Josie’s only in a temporary shock, but otherwise at home in the violence and gore.

I’m glad the dog is okay!

The twist at the end made me think that Josie isn’t a very great assassin. These men just aren’t staying dead! (Though obviously, they wouldn’t want to kill her if she was bad at her job.) I assume this means Lady Killer is getting a third volume because cliffhanger.