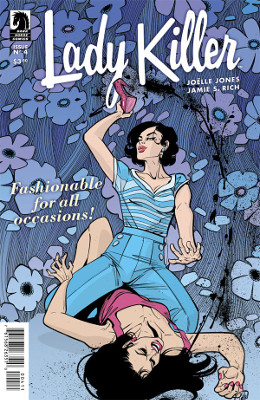 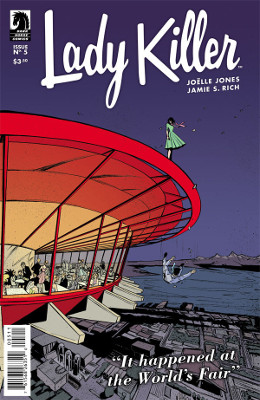 Loved seeing Josie outsmart Peck. Of course, she steals his car and then he shoots the old man. Then Peck will always come back for his car.

It was too perfect that Josie had yet another pair of perfectly matching lavender heels to replace the ones that Peck shot earlier. Gene really does live in his own world. With the dog. I’d be surprised if Josie wasn’t going to train her daughters. She may not want them to work for Stenholm, but she will want them to stay alive.

Josie finding the other ‘vulnerable’ agents was also great. Ruby, a fellow woman who needs to work off debts and Irving, who is older. I have to say that I didn’t see Irving killing that young couple coming.

Jones’ art continues to be a huge highlight of this book. I love the layouts. The house where Irving is was particularly well done to show the inner-workings of this world.

It’d be pretty hard to make me dislike anything about this issue. I live in Seattle, and one of my very favorite things about the city is the Seattle Center with all the relics from the World’s Fair. They’re odd and mostly in great repair, and they’ve been added onto. (The only thing I don’t like is the Chihuly Museum and Garden, but that’s another story.)

Of course, Gene, the girls, the mother-in-law, and the dog show up to surprise Josie at work. Wow, was she surprised. I appreciated the twist of her mother-in-law watching Josie kill Peck and having had a romance with Irving, instead of a more obvious family-in-harm.

Interesting to see how Stenholm was so unafraid and continued to underestimate Josie. However, the moment Irving showed up, he was started yelling in fear.

Poor Ruby. Of course, that was pretty obviously going to happen when Josie left her alone with Peck. He’s a wily one.

I loved the minor closing moment when Josie slams the door on the woman selling makeup’s face, and then Gene suggests she get a job. I’m looking forward to Josie starting her own gig. And many more comics from Jones.

Join Josie on her killing adventures in Lady Killer.