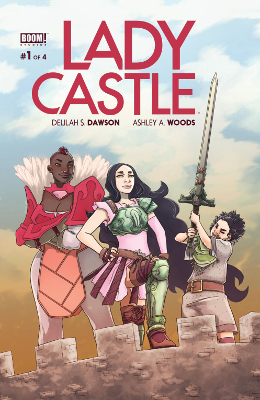 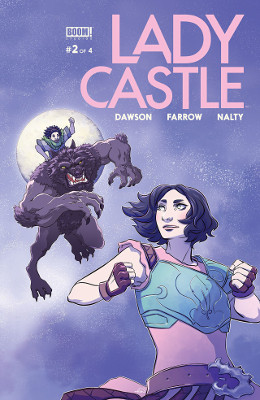 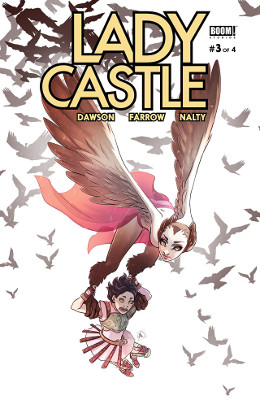 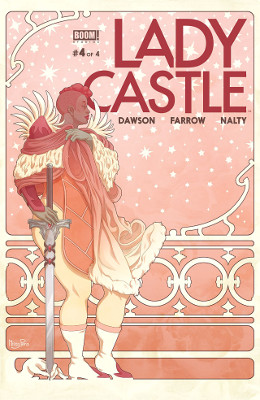 This book had me at Aeve singing her song — hum it to the tune of “La Bella” — when she gets to the part about her daily activities, which includes “pet my snake and bake and dream of anarchy.” Wood’s art shows Aeve’s snake around her neck, and she’s holding a cake that decorated in blood red frosting with an anarchy symbol on it.

I was a little worried it would be derivative of Princeless — not that there isn’t enough fodder in fairy tales — but Dawson and Woods set Ladycastle apart.

King Mancastle leads all the men (except one) to death in their village on a quest to find Aeve a prince. He also curses the entire village. So the ladies have to clean up their mess. Like always and forever.

I love that the blacksmith Merinor becomes King. King Merinor Ladycastle. And she’s all about getting down to the practical business. Not to mention, she both cares about adventures and quests and about taking care of the town and the people. What? So novel.

Sir Riddick is a ridiculous character. But I suppose they needed someone in town to oppose change and oppose ladies being awesome. Always gotta have one guy bringing them down.

Love how during Aeve’s training she points out how buff she is from hauling up books to the tower’s top. That would definitely be a great workout each day. All the pull ups.

Gwyneff is an adorable little sister. Poor girl’s mom died while in childbirth with her, and she’s felt overshadowed by Aeve and like her father only wanted Gwyneff to be a boy. I understand her.

I love that the first “curse” upon their village is an attack of salamanders. And how they figure out that the salamanders are a natural light and heat source, which means they can use them.

Definitely looking forward to the rest of this mini.

“Do you have a library card?” And then our hero Aeve whips out the library card she’s had since she was six years old. This is so me. (Or would be me if I still lived in my hometown, and we hadn’t upgraded the library system to computers.)

Yanni is a fabulous addition. They do such a great job talking about her disability, discussing how her husband deemed her “worthless,” and how Ladycastle leaves no one behind. Yanni’s inventions will no doubt save the day, but also she’s a member of their society, which is all the clearance she needs. I do wonder just how she survived down in the library dungeon all those years.

The werewolves were a bit cheeky. It’s nice to see the tower getting actual purposeful usage. I was not expecting Aeve’s horse to be a pegasus, so nicely played Dawson and Woods.

I’m glad they addressed Gwyneff and her need to mourn her father. Yes, life is probably 100% better without the men and under Merinor’s rule; however, that doesn’t mean that they don’t miss the people they’ve lost.

Merinor’s loneliness and isolation as a leader was well done too. They could have leaned on her as a “strong woman is strong all the time” trope, but instead, she gets depth here. She doesn’t always know what to do to save the village. And she won’t always get it right.

I wonder why there’s a new artist on this miniseries? I like Farrow’s art, and it was a pretty great transition that I didn’t even notice until I went to write this review. It was especially seemless since Woods and Farrow collaborated on the last issue.

The Harpies demanding a party and then Gwyneff’s refusal to be a lady were great. Okay, she put on a dress.

This was a very nice message about stepmothers. Especially how they generally get treated in stories. Philicia and her ladies-in-waiting seemed like good people. She cares about Gwyneff and Aeve in a different way than Merinor does.

Sir Riddick’s moments of getting it were pretty great. He’s become a better aside than a straightforward disrupter of Merinor’s rule.

To the very end, this book remains true to form, and there’s some twists to everything as well. Mancastle and his army are truly dead. One thing I was worried about, especially as the Wizard was revealed to be the one who put the curse on Mancastle and the rest of the citizens, was that the men would suddenly be alive. Or perhaps they were actually those animals who served as the Wizard’s soldiers.

I didn’t expect Aeve’s curse to be real. Mostly because her father went to such lengths to keep her in the tower that it seemed like a lie built to discourage her escape. I so enjoyed just how unfazed Aeve was by her Gorgon curse. And how quickly her and Merinor just covered the snakes with a helmet. No biggie.

It was a nice bow end to Gwyneff’s drama that Aeve didn’t hesitate to take her sister’s place as the Wizard’s captive. Gwyneff had complained a lot about her sister not really caring about her or noticing her, in that very special way siblings and teenagers do, but this proved otherwise. Merinor’s assurance that she’d see Aeve the next day was pretty great too.

Once again, the ladies use their skills and brains to defeat the Wizard — or at least have Aeve best her in combat — which serves to be more effective than sheer brawn. It also takes the entire village, not just the best knight.

Additionally, I enjoyed the idea that the Wizard didn’t need to remove the curse because the curse realized that the women of Ladycastle were innocents. Mancastle was responsible for the death of the Wizard’s husband.

The warning about the dragon serves as an opening for a second volume of Ladycastle. Which I say, yes, please! to.