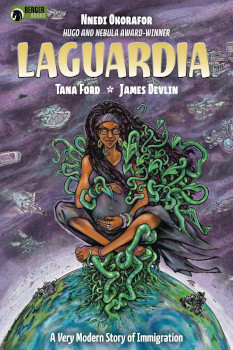 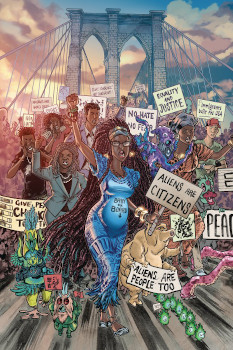 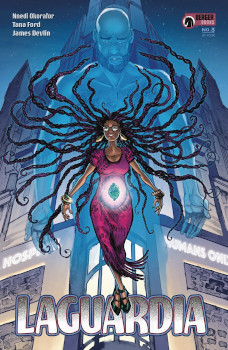 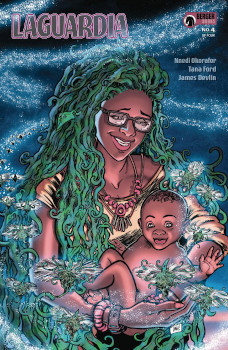 I wanted to spend all the time in this book with Future and with Letme Live. They were the only ones that I cared to get to know more. And they offered a lot of questions.

I don’t understand Citizen who is supporting in the anti-immigration fights. He’s supposed to show how even causal support of an anti-immigration group and that type of sentiment is toxic and affects real people. However, he has all those alien “plants.” And even he didn’t realize that they had some intelligence and sentience, like Letme Live, seems like he’d reject them too. I mean, I get culture appropriation, but usually, it takes a little while. Also, I found him kind of boring.

Will Grandma get a name? I assumed that Grandma is Future’s biological grandmother given how she treats her, but then I’m not so sure given the rest of Grandma’s collection of people.

I like Future’s pull and tug with the US and what she says about the environment. And loved how Grandma knew exactly what was up with LetMe Live.

The art is pretty solid so far. The plants are my favorite part as that’s the most inventive so far, and I hope we’ll get to see more of Ford’s imagination in design.

In general, LaGuardia is a charming book. The characters are fun and vibrant. Future is interesting and layered; when you think you’ve figured her out, she does something different. I kind of wish this world had more than a four-issue miniseries. Of course, it’s pretty common that I want to know more about Okorafor’s worlds.

Laundry, Payment, LetMe Live, and Surveillance all jump off the page in terms of characterization and design. I like how Ford uses elements of our world and familiarity to make them kind of relatable, but not entirely relatable.

I do want to know more about Future’s baby. At first, I thought perhaps she came back to New York just so her child could be an American citizen, but something else is happening.

The progression of LetMe Live’s growth was astounding and beautiful to behold. As a gardener, I think it would be both fun and terrible to have talking, sentient plants. It certainly would make gardening more lively!

Jackie and Laundry’s friendship is the best.

This protest and airport scene was an interesting and real way to show Grandma’s profession and what she thinks of the world. Plus, LetMe Live quoting her at the end about how not everyone can protest, and how protest isn’t the only action you can take was great.

I loved how Orkorafor unraveled all the mysteries here. Well, almost, all the secrets, we still need to know how LetMe Live’s DNA affected Future, Citizen, and baby Future Citizen Live. Not to mention if LetMe Live will be able to live after being uprooted.

This issue was masterful. Future’s presence and her labor scenes were pretty incredibly well-done. Yes, she was in a panic that she couldn’t reach her grandmother, but also the whole community was with her. They were all there even though the hospital was one that served only humans.

The scene where the doctor detours so Future can see the statue to her parents — celebrating how they served both humans and aliens — was lovely. It gave us a bit of background around them without taking up the whole story. Though one does wonder why a hospital that’s anti-alien in structure — no doubt the owners and shareholders — keeps a statue of people they’d consider radical, so radical they were killed for their beliefs.

I love how the story of Citizen giving LetMe Live to Future was woven in. Especially how much of a leap of faith Future takes when LetMe Live begins to talk with her. I don’t know if it was her profession, how she was raised, or the shared DNA that made her accept them so quickly. The one thing I didn’t quite understand was why they had to run to NYC. I suppose we still don’t have any information about these other flora types that are after LetMe Live, and why they also wouldn’t be in NYC. Maybe this is what will be covered in issue #4.

It was sweet that Citizen showed up. While I can see how Citizen would forgive her upon seeing their child, we’re still missing some of the reckonings of these two. The steps of reconciliation aren’t there yet.

And all my concerns about Citizen and Future needing to have a talk — taken care of almost right away. I should know to trust Orkorafor with this emotional work.

The story about what happened to Citizen after Future and LetMe Live left was heart-wrenching. I guess I’m okay with Citizen changing in his beliefs about aliens due to loving plants. (I also kind of think this story was Orkorafor saying, ‘let’s explain why people love houseplants so much.’) But dang that fire was heartbreaking.

Grandma Obioma and her Nigerian network for the win. Seriously, I adored all these details so much and her presence throughout the story. Especially the hints that she had a special someone back in Nigeria and they were going to hook up again. Such little amazing layers for her.

I adored Future getting a new job at the hospital only weeks after giving birth. So boss and the kind of representation needed to show the many different ways people can be mothers.

The wedding conversation between Payment and Citizen seemed extra forced. I get why this conversation needed to happen, especially when Citizen had some wrong reactions to Payment and the other aliens holding Future Citizen. What was interesting in this conversation is how Citizen chooses to shave his beard and pass as human — which side note, he looked better with a beard — and Payment, who is a shape-shifter, chooses not to hide. (Which is different from when Payment went to the protest and decided to appear human.)

Of course, LetMe Live died. But I love how the baby signaled to all the rest of their people to arrive, everyone that LetMe Live thought had died. Ford’s art and Devlin’s colors were gorgeous and magical in this situation. I assume the signal did have something to do with Future eating whatever it was from LetMe Live when she gave birth.

Not sure what to think of the last page, except that it may be a signal to a spin-off about Grandma in Nigeria doing her immigration lawyer work, and I am all for that.