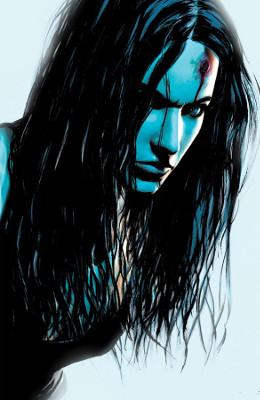 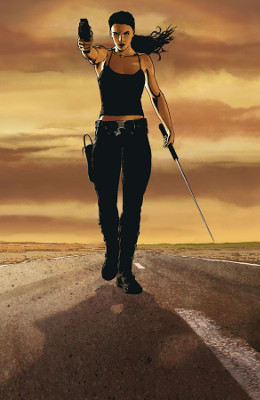 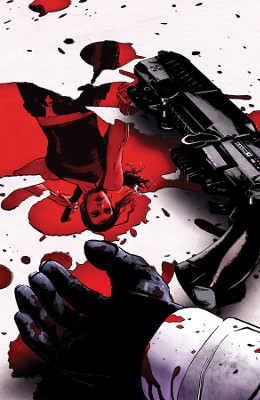 I usually don’t bark over character’s names, but Forever, aka Eve seems rather obvious. And perhaps I’m only thinking about this because Rucka lamented Atticus Kodiak’s name at GeekGirlCon ’12. (For those that don’t know, Rucka has a series of novels featuring a main character named Atticus.) Maybe it’s because both Eve and Lazarus are both Biblical and Forever has some big implications.

I am interested to learn more about this world. I’m not entirely surprised that Rucka’s writing a book where society is controlled by a few really rich people. Seems like it’s right up his alley.

This world’s going to be interesting, and I’m looking forward to seeing how Eve weaves through it. And not just with the poor, but also with the other families and their Lazaruses.

I like that Rucka’s slowly weaving in an attitude of rebellion, or at least non-acceptance, into Forever’s characterization. She realizes that her sister Beth treats her like a machine. Forever tells her father that Jonah is bloodthirsty, and she’d rather kill one innocent man than let him murder a bunch of people. Somehow I don’t think she took those pills like a good girl.

Seems that perhaps Beth and James are Forever’s parents, not Malcolm and Abigail. Though we may have some science instead of biological parents. Or they are just the champions of that project.

Jonah and Joanna just make me think of Cersei and Jamie on Game of Thrones. But I can see how being the only elite folks and being at war with the other families makes your mating choices slim. Especially since Jonah clearly believes that he’s better than anyone. (Still gross though.)

Forever definitely walked into a trap from the other family.

I really appreciated the extra information and the timeline in the back of the book. Though the orange-yellow color of text was kind of hard to read.

Ooh, I really like what we’re finding out about the Lazarus when Forever and Joacquim Morray are hanging out. They seem to be a lot more comfortable around each other than with anyone else. It’s also interesting to know that each Lazarus is a bit different in how they were built.

I do think that Malcolm trusts Forever more than family Morray trusts Joacquim. Also interesting that he knows about Jonah’s betrayal. Makes me think that Jonah and Joanna might not be around for very much longer. Or there’s going to be coming a head-to-head.

Somehow I don’t think they’ll be successful in trying to kill Forever. And since they don’t know that Joacquim was with her, they are definitely possibly causing a war.

I’m continuing to love this post-apocalyptic setting. Rucka’s doing an awesome job at thinking about how the world might’ve change and how needs shift. I do think it’s a little tedious of a balance when so few people actually control the wealth and make the decisions. Of course, that’s clearly why the Lazaruses were made.

Join in this brave new world and buy Lazarus Volume 1