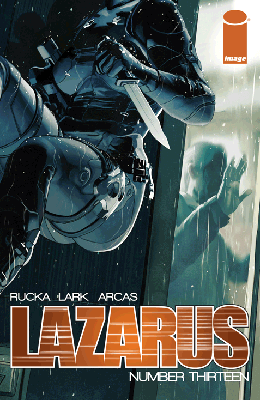 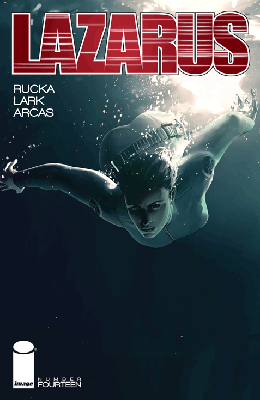 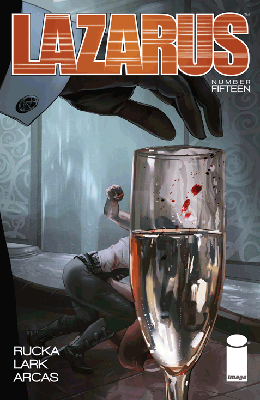 Continue to love this book so much. The layers in it are amazing from the background stories, to Rucka’s subtle movements of what happens and what the readers see, and Lark’s art carrying the story.

I felt so much for Forever in this issue. She feels vulnerable in the dress, and Jakob’s actions made her even more so. Not to mention her burgeoning feelings for Joacquim. I do think this is one of the first times that we’ve seen Forever confront her father in an angry manner. Of course, Malcolm is very savvy and is able to push the play to the next level. (We’ll just see if he can keep all his players in the air.)

I loved the poker game with the all the Lazari. They’re all amazing, and I love their connections with their separation based on their family ties. So fascinated by the differences between them — such as Li’s technology-based enhancements — and how some of them have been there for a long time and others are new. I think this also gives a good view of the greater world and what’s still out there from the world we know.

Can’t wait to figure out what Malcolm had Forever do to Jonah. Either she’s taking out something from him or injecting something in him. Her line where she says she sorry shows so much about her humanity.

These issues about the Conclave are just amazing and so impressive. This is the moment where these arcs have been building up to, and they are paying off. Major kudos to Rucka and Lark for how smooth these issues come together. Like this is the ledge.

While I wouldn’t have cared if Forever went through with Malcolm’s orders and killed Jonah — from the standpoint that Jonah annoys me — it speaks volumes about Forever that she didn’t. Jonah’s confessions to her were just enough of a tease. I loved his answer to her question about whether or not Malcolm was her father. The very “duh, you were born in the lab, so probably kind of not.”

I also imagine that Jonah’s time with Hock very much changed his attitude about giving people pharmaceuticals to unknowingly change their attitudes and behaviors. Forever just might have a hard time if she tries to come down off them. Though interesting to see what was genetically enhanced in her and what is the drugs.

And at the very end, Jonah only wants his life and for Forever to know that he never did anything but love Johannah. At some point it may be interesting to catch up on what happens to him.

I’m rather glad that Sonja did not die. Though she may like Eve a little less after being stabbed through the torso by her. Interesting to see Sevara ask for Sonja’s life to be spared. I suppose that if nothing else, a Lazarus is a large investment, and with Sonja being so young, she’s a new investment.

Yeah, the moment that Hock put that pill in his mouth, I knew something was up. It was a nice slight-of-hand when he knew that Sonja wasn’t going to win the trial by combat for him.

However, that was a pretty out-and-out bold warfare move. Which Hock seemed a little more logical than that. Seems like he would have far less allies by being shady and underhanded than playing by their rules.

I’ll be very interested to see if Malcolm lives or dies. Right now, I’m pretty much 50/50 on what’s going to happen to him. On one hand, he has a lot of crazy biotech. On the other hand, Hock does too and wouldn’t waste a move like that if it wasn’t going to work.