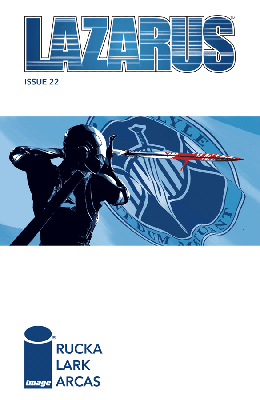 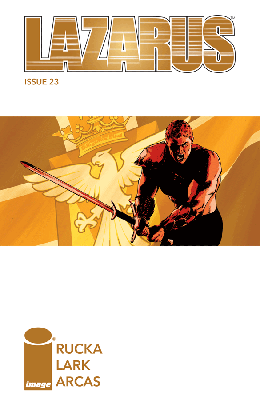 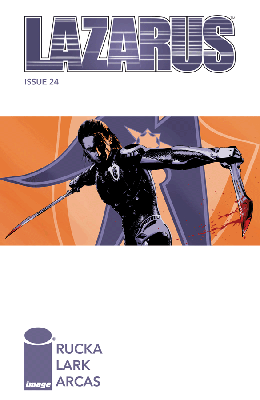 If Johanna wanted to get rid of Sonja Bittner, sending her to kill Rausling’s Lazarus Cristof Mueller is an ace move. Even if it looked as a good plan since they needed a Lazarus and one Forever is terribly injured and the other a child still. I’ll cross my fingers for Sonja and her training since living with the Carlyles.

Oh, Forever, that looks terrible. Malcolm won’t be very happy when he wakes up. Though Johanna may be in a much better position with her father’s goodwill than before. She definitely puts her siblings in their place.

It is interesting to see Johanna echoing her father’s interactions with young Forever.

I’ll admit, I did not see Sonja winning against Cristof. I’m happy for her because I like her better than him, even though both of them are tools of their families. Lark, as always, does an incredible job with the pencils in fight scenes. He has such an eye for perspective and the flows of motion from panel-to-panel. I’m always in awe of these one-to-one combat scenes.

Especially when their endings are as a satisfying as Cristof’s head separated from his body.

Speaking of families, it sounds like the Carlyles just plan on absorbing the Bittners. Hints of it in Malcolm’s comments and one of Rucka’s responses to the letters in the back. That’d definitely make the Carlyles much more powerful (with an extra Lazarus, in case their adult one goes rogue), and they’d be surrounding Hock on both sides. And if there’s one guy/family who we’re all cheering against, it’s Hock.

I love how Malcolm’s basically like “I manipulated all of this to get our way” even if it’s just a load of bullshit on many angles. I don’t really know why he trusts Johanna. But maybe he’s testing his children to see which is the strongest. Obviously, not Jonah or Stephen or Bethany.

OMG, I want to know more about Momma Carlyle. My best guess is that if she’s a scientist, she’s Forever V0 or V1.

Forever 7 isn’t going to forgive Johanna anytime soon, and if Malcolm finds out that may be Johanna’s undoing. Forever says she knows, but how much does she know besides Johanna’s original plans. Malcolm expresses so well the Carlyle’s weakness without a Lazarus.

This book will only get harder in the coming year. Harder when a so-called billionaire “business” man stole an election on an authoritarian fascist mission for more adoration to feed his narcissism. Rucka’s letters in the back were harder too because I’m behind on reading, and it’s December 2016 and the letters are from August 2016. (This post won’t go live until January 2017, but likely pre-inauguration.)

All I see is the future. The dead. The waste (us). The environmental destruction. The mass enslavement.

The freakiest part of this issue wasn’t Johanna taking Forever into the lab with all the Forever body parts. No, the freaky moments are those with Michael and Casey. With them acting like they live in a normal world. With we, the reader, cheering on their happiness and their love. Even if the happiness and success comes at a high cost on the soul. Because to them, it’s “normal.”

It’s the normalization of everything that’s not right. It’s Aleppo on a scale we haven’t seen, but we may in the coming years. As the punk rock saying goes, the only good fascist is a dead fascist.

This is not normal, and neither is what’s happening to this country or in Aleppo or in the Philippines. (And probably more places whose stories we don’t know.)