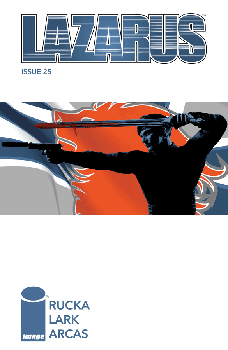 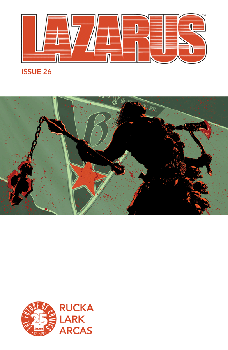 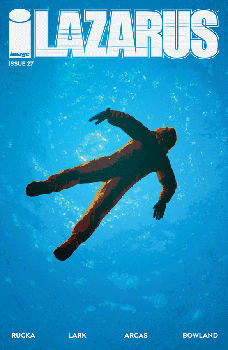 When three Lazari — particularly Sir Tomas with the braggy coolness — are scared of The Dragon, you know shit is about to get real. Cee and Luis may get way more action and possibly their own deaths than they bargained for. Of course, if they think their own deaths are imminent, I can see them broadcasting live.

Why is the next issue of this book postponed until January?! (Yes, this issue review was written over six months ago.)

Forever is definitely going to have to come to the battlefield in order to clean things up.

Johanna is correct that Forever 8 is deep into her conditioning. And also a child. It’s true that their lives are identical, but they are also different. The same way two siblings growing up have different experiences. (I have a brother who’s seven years younger than me, and we might have grown up on different planets with how much our experiences were different, even if we were mostly in the same environment.)

I really want to know more about the history of the program that developed Forever. And where’s Mrs. Carlyle?

Waiting for this issue was so hard. After reading Rucka’s essay in the back, part of which was about how long this issue took, it made me think a lot about how many of the creative things I love have been on hold since T***p. Comedy shows don’t know how to write jokes. Here maybe Rucka’s world seems too close to what’s happening in reality. (Except arguably none of the family heads are as dumb as T***p. Malcolm would destroy him with a flick of his pinky.)

Joacquim and Forever are breaking my heart. You want happiness and independence for Forever. We think her romance with Joacquim is that. But maybe it was manipulation for a better alliance or manipulation to be able to destroy an alliance by the Morrays or manipulation to control Forever. Also incredibly fascinating to see Joacquim’s machine body. Now I want to know how much closer to a Terminator he is than genetically-engineered Forever. (This was explored in Lazarus X+66.)

The Dragon is about as terrifying as I expected him to be. I did feel let down a bit. But I’m not sure what that let down was. Maybe it was just the wait. Maybe I expected the Dragon to have some fire breathing enhancements. Not that he needed it. Lark’s pencils are brutal.

Forever was right that she and Sonja had to run. Tomas RIP. I wonder what his family will do now. And what the Lazauri will do without his calming influence.

Michael is now part of Johanna’s world. Sadly, we’ve already seen how she spits people out. Will she also do this to Michael? Will she do it to Forever? And how does Cady Rosales play in this? Who is she really? We met her after Forever killed her father.

I wonder how much of the Danish was triple-checked after the Spanish debacle. Of course, worldwide there’s a limited number of people who speak Danish compared to how many people speak some form of Spanish. (Hell, Twitter ads think I’m a Spanish-speaker since I mentioned it once that I’m learning and can ask you fascinating things like ¿Tienes un gato?.)

Anyway, wow, this was a slow simmer, but I dug the tone a lot. It fit into the generalized corruption and how much local communities need community leaders, even if they aren’t the ones officially put in place by the Family. It was nice to see Bittner’s territory not under attack. Plus, a local culture that was very much “it matters not who is in charge of us.”

Somehow, I think they might say something different if Hock was their overlord, or if the Zmey came to their shores to kill.

Jonah is like the cat with nine lives. Pernille pretty much does what she wants and what she sees fit to do. And she really likes Jonah as a mystery man. Which makes you wonder what will happen when/if she finds out who he really is. It’s hard to say how known Jonah was among Bittner’s people, or how widespread the news of his “death” traveled.

Pernille’s father Jens is a good man, but it seems like a lot to sacrifice for a stranger. Or too much potential danger to put oneself under. Good thing everything seems to work out, for now.

I wanted to give a shout-out to Arcas’ colors here. They are a gorgeous accompaniment to Lark’s pencils. I got a true sense of low sun in this country.