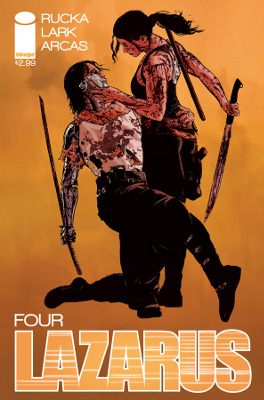 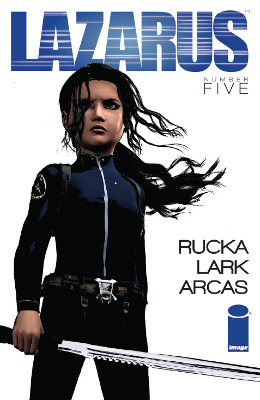 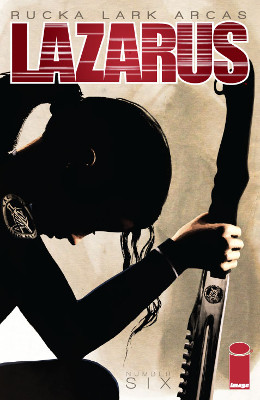 Not surprising that the Lazaruses were still alive after the bomb attack.

Wow, I did not see Johanna having Mason beat her up in order to make her not look like she was part of the failed attack. Instead, everything gets blamed on Jonah. So much for sibling incestuous love.

I’m so looking forward to Forever getting to know more of where she came from. I find Rucka’s research and imaginations of bio-mechanics and DNA manipulation so interesting. Can’t wait to find out more and about the other families.

I have a feeling that Johanna may reveal her contributing hand in the attempted murder sooner rather than later. Though I have a feeling there are more plays in action from both Johanna and Jonah and perhaps together.

More world-building. That’s pretty much what I’m craving in this story.

The tale of the Barrett family is interesting. In the way that yes, this is what would happen if we ran a government like a business. This puts further context into what it means to be Waste, in that the Barrett’s have a contract with the Carlyle family. Not to mention, they had a nice house and seemed to have a decent level of technology and education. Which is not really what I expected of people labeled Waste.

Johanna’s working hard to make repairs with her family. LA seems like it would be one of the more populous cities and harder areas to control.

Interesting that Eve goes to track down Cady Rosales to say she’s sorry about killing Cady’s father. Makes me wonder if this is more of Eve breaking the barriers down by not taking her medicine or the mysterious messages that she’s getting that Malcolm’s not really her father.

I like the insert of the flashbacks to show Malcolm being a terrible father to her. He definitely sees her as a machine, even when she was a very small child. If we thought he was being nice to her in earlier issues, this shows that Eve’s a weapon he created.

More flashbacks about how the family doesn’t ever come to visit a young Eve. Seems like a bad idea if they wanted her to never be suspicious about her true origins or who her family really is. I’m sure Rucka will pull out something extra heartbreaking.

I’m really enjoying the Barretts. Rucka’s using them smartly to show how the Waste are treated and how one must survive in the world. I’m glad that some of my questions about their lives were answered in this issue. (I’m also glad to know I’m not the only one who’s creeped out by The Post, I mean, the xBox One.) Though I am worried about getting too attached to this family.

I loved Eve interrogating Emma. That she just didn’t impulsively go after those who stole from the family. Instead, Eve went for the information and to have the exchange be on her territory. Though I feel really badly for Emma as those guys were jerks. I have a feeling that Eve’s going to find more information than she bargained for as she gets to the bottom of this crime.

In general, I just so very much enjoy the entire feeling of the book. So much cares gone into the design and how it translates into the reading experience that it’s just magnificent. Lark’s style is just perfect for mood and setting.

Get onboard with the dystopian world and buy Lazarus Volume 1