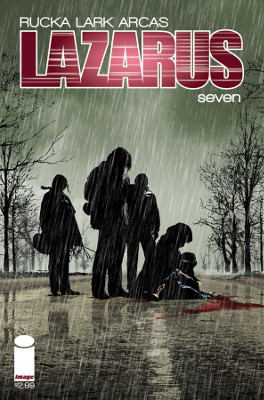 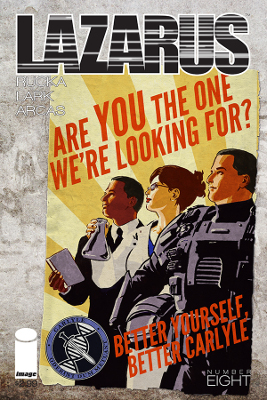 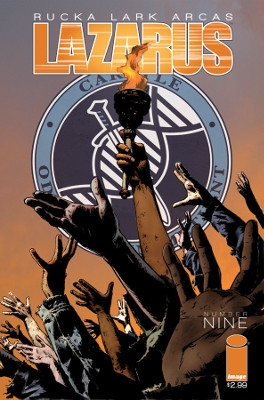 This is a fucking amazing book. Seriously, from beginning to end, there’s great care in the details of the narrative and the accompanying art. Everything is so precisely laid out that it never fails to be a satisfying read. Even if the topics aren’t cheery.

Loved seeing more of Eve’s relationship with Marisol and how they were both soldiers. It’s interesting to see her as a younger girl and asking questions even then. Also horrifying to know what kind of combat she was put through for testing.

I think I haven’t given Johanna much credit. She definitely knows how to play Emma’s buttons much better than Forever’s threatening to torture. It’s true that torturing people with nothing to lose probably won’t get you far. (Not to mention torture typically being pretty ineffectual.) But if you can appeal toward something they might want, like a better life, gold.

I’m also interested to learn more about tagging and how that works with Waste. That was a nice glimpse of the universe without being an obvious fact we needed to know.

The Barrett family really just can’t win. Poor Leigh. And now they see how many thousands of people that they’re going to be against for getting chosen once they get to Denver. Somehow I think they might stand out. Or at least, Denver for the Lift will change their fate for better or worse.

While still heads-and-shoulders above other book, this issue felt light and obvious. Perhaps everything’s flowed so naturally and Casey meeting Angel at the end left me feeling like their meeting was very contrived to happen for the plot.

Forever’s training as a child is still heartbreaking. Especially with the continued assurance that she’ll have to fight and kill Marisol. I suppose that’s one way to break her mind to only serve her family. Not to mention how much Forever craves her father’s attention like any child and on her birthday.

Forever’s reflected pain in her conversations with Malcolm as a grown-up are increasingly stressed. I wonder if we’re supposed to read these flashbacks to her childhood as what Forever’s currently pondering on?

I am a little surprised that Emma actually got the job as an actor. I expected it to be a false promise. I guess that she now has something given to her by the Family.

The growth in Michael as a character is great. I’m loving him bargaining with the nurse nuns that he’ll help out if they give him a new pair of glasses. As someone with terrible vision, one of my nightmares about that kind of world would be the ability to get eyewear to see.

Every time I pick up this book, I think about how it can’t get any better, and then it does. Seriously, nothing gets me more jazzed about comic book storytelling than Lazarus. Rucka, Lark, and the other artists who help out are just so amazingly talented.

I really didn’t see Forever not killing Marisol and getting away with it in front of Malcolm actually happening. Maybe I got the test wrong. Maybe it was a test of if she would kill someone that she considered family. After all, Forever is supposed to serve her family first and foremost.

It seems to me that Stephen understands more about the family’s role in keeping their nation together than anyone else. Or perhaps he’s being groomed to eventually be head of the family. Though on the other hand, we haven’t really seen just what these life-extending drugs and such can do.

Rihan Fisher is Stephen’s boyfriend right? That seems pretty explicit. Even if he’s clearly a Serf.

Unsurprising that Michael was picked out of the candidates at the Lift for his medical knowledge. Kind of surprise that they didn’t outright fix his eyes. I assume if they can create Forever and make people live forever, then they can do some lasik.

I love Forever seeing something of herself in Casey. Casey also won’t let people die, even if she herself might die due to Angel stabbing her. I’m looking forward to having her deal with her feelings about being betrayed, and I hope that Casey and Michael get to spend a lot of time around Forever.

So looking forward to seeing what’s been happening with Jonah.