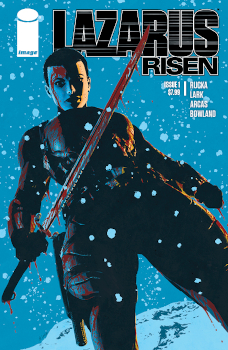 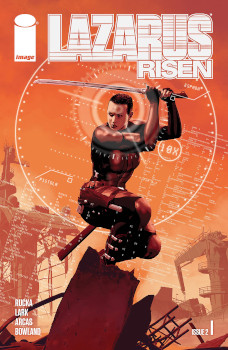 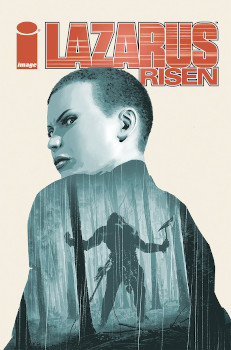 I’m a huge fan of Lazarus moving toward this enhanced and larger format. It allows the story to expand, and this world is so detailed with so many stories and questions. Of course, this is Rucka, which means he probably has an idea for the answers in this world. I’ve been reading a lot of fantasy books recently, and I feel relief in reading books that I know there’s been a ton of world-building beyond the page, not just fly-by-the-seat-of-your-pants story injection.

This issue starts with a couple of years skip in time from the last issue. This gives some off-page development of the Johanna and Forever relationship and shows them working more as a team. The others might not understand why this is happening, but no one is going to question Family.

Eight being tested through her limits, and that scene with Marisol broke my heart. That’s some brutality Bethany has swallowed down into her soul.

The reveal of Bethany looking at her father’s scans and seeing how there’s a flaw in his longevity explains why Malcolm has dropped back from Family leadership. It also explains why Bethany has been so distracted for two years (with Malcolm, Forever Seven, and Forever Eight) that she hasn’t noticed Forever Seven hasn’t taken her meds.

While I love the change of Forever getting rid of her long hair — which, while I’m sure has to do with her injuries, it’s also way more practical in battle — I did get confused in the art between her and Marisol. In the scene in Alaska, I thought Johanna was with Marisol, and then it took me a while to realize it was Forever. I even spent a moment flipping between the two in the book. This could be on purpose from Lark, especially in the way Marisol was more like a parent to Forever than Malcolm and the missing mom.

Speaking of the missing mom, where is she? Bethany doesn’t seem to know since she cannot reach out, but how she talked about her makes me think she’s not dead — which has been my impression all along. It seems like mom’s either somewhere hidden (maybe she escaped?) or perhaps she has something like dementia and cannot communicate, but is forever young.

It’s also interesting to see Bethany look at Malcolm’s file when James sneaks out of their bed.

One of the issues, for me, with the Zmey is how evil he is, and what we learned in the miniseries issue about him doesn’t give us anything but the evil. My problem with this is because when we open with a story about taking Alaska back (or any of the Vassalovka territory), we end up cheering for the lesser evil. Like the Carlyles are terrible, but would you rather be under the thumb of someone who created the Zmey, or drugged up in Hock territory? And as a reader, you end up cheering for the Carlyles. This was always a tricky balance with the story focused on Forever, the Lazarus. When she was truly outside the family and continuously manipulated — even if only we, the reader, knew it — she was who you cheered for. Now, Forever works with Johanna and consciously chooses to continue the interests of Carlyle. What does this mean for the story’s ethics message?

Maybe Miranda Aklaq ordering the execution of her brother is a foreshadowing of how Family always comes first, even if it involves murdering your literal blood family. We know Johanna can be manipulative and ruthless. Maybe the foreshadowing isn’t for Forever, but Johanna’s twin brother Jonah, who’s out there somewhere with his son.

The set up with Zeferino and Joacquim was good. I feel extra bad for Joacquim, as not only did his family erase his personality and self-control, but also in two years, they haven’t been able to fix his face? That seems odd given all the medical wonders everyone has. Hopefully, Forever will be less shocked by him and lingering in her heartbreak.

“Your Last Meal on Earth” by Lilah Sturges — I really enjoyed this food nerd backmatter. It’s nice to explore what life’s like for other people, not just the Families or the Lifted. I liked what it said about the greater world, like access to fresh produce and meats, and how much more regional your food experience would be. Ginger had talent, and it was interesting to see generational knowledge passed down. She was taught how to make the lobster dish by her elders, but she’d never tasted lobster before. In the end, Ginger had a terrible choice to make. Did she make the right one? Maybe. Or maybe Johanna got what she wanted.

How many versions of Forever have tried to kill themselves in those woods and wanting to know why they come back to life? How many truly died? You can see Marisol doing this exact scene with Forever Seven. You can see it in how calm Marisol is, and how she knows what’s going happening. That’s no black bear in the forest.

Abigail is alive. She has a nurse taking care of her, which seems to mean something is wrong with her. I’m leaning more and more toward mental health due to disgust at what they’ve done to the world. I’m imagining she might rather be like Commander Lawrence’s wife, Eleanor, in The Handmaid’s Tale tv show. But I’m jazzed we’re finally going to get to know her.

Relatedly, this supersized issues are rocking my world still.

Lark is the champion of choreographing a fight scene — particularly hand-to-hand or sword-to-sword — on the comic book page. This is an incredible skill, and it’s so seamlessly on display here. When reading this issue, I had to slow myself down to appreciate the skill behind the flow.

My one tiny quibble was Joacquim’s eye target views and their uses. It worked brilliantly on the cover, but in the smaller interior panels, it cluttered the scene.

Forever killing Zeferino reminded me just how well this book does gore. I appreciate Rucka not shying away from showing the actual destruction of violence — violence without blood and costs is just action — and it keeps the tone and world centered as none of this is a good thing. Even if these trained Lazarui do revel in their powers and their training. This is what they were created for, even if most are not say taken over by their Family like Joacquim.

Even if Forever knew it had to happen, her killing of Joacquim and how the scene was laid out was sad. Joacquim, under his Family’s control,an definitely had an entirely different personality, and that moment before he died — while it fits this trope — it still hurt.

I do wonder how Forever’s fight with the Zmey will be different. What has Forever learned since then? We, still in many ways, don’t know what drives the Zmey to do his Family’s bidding or how they control him as a weapon. Again, I worry here that he’s been built up too much as the unbeatable big bad monster without a known weakness.

Christopher’s “Ganymede” short story was interesting in that we haven’t seen much with Carragher. It did take until the story said explicitly that they were in Australia that I remembered. I don’t know if I think that there should be a little Family blurb before these stories if they are taking place with a Family we’re less familiar with.

Barnett’s choice, at the end, is unsurprising and about the system that she’s a slave in. Carragher has promised her freedom, and freedom from her master is a better offer than freedom through rebellion. Even if Barnett’s master may still yoke her. Her systemic choice felt like one in Games of Thrones, which frankly, as many problems as I have with the TV show, I do think we need more stories about systems. It felt like Jerome should’ve known better than to reveal everything to her.

Granted, Jerome needed a military offer who knew how to run a nuclear submarine. This story also seems to come from a place in the belief that the only way to hold power is to be a threat through aquiring nuclear capabilities. While makes you believe Carragher knew exactly what was happening the entire time.

In the last issue, I wasn’t sure what Forever would do to go up against Zmey differently. I suppose learning to not attack him face-to-face with an arrogance that you were going to win just because you had backup was one of them. I’m not sure what they were doing here beyond the use of holographic systems, which does surprise me that the explosion — which I assume was real — didn’t hurt any of the technology. Staying far away from Zmey seems like the best plan to stay alive. Including Sonja in the scene must’ve been nice for her.

Honestly, I cannot wait to see more of Forever’s and Sonja’s blossoming and changing relationship. It seems like it would behoove Johanna to have two Lazari that trust her. She’s certainly attempting to add a third, Eight, into her circle of trust.

The capturing of Johanna on camera crying over the Waste bodies in Los Angeles was an interesting tactic. I don’t believe it would be anything but on purpose. She’s not that sloppy. Nor does she seem all that sentimental. It’s hard to care about the value of life when you are, for all intents and purposes, immortal yourself. But Johanna certainly tries to be a different leader than Malcolm in how she treats people. Perhaps, she sees herself as a kinder leader than her father, as she certainly sees herself as a smarter one.

Abigail is now in play. I liked how much Malcolm figured she’d come back to him in his dying days, but she is certainly not. Having mom come into the picture may not be the best thing for Johanna’s leadership and claim on the Family.

However, we still don’t know a lot about why Abigail locked herself away and refused to interact with the rest of the Family. Besides that she seemed very pissed at Malcolm. I can’t also help but wonder about our other lost Family member Jonah.

We do ominously learn that Bethany and James have found out that someone has messed with Forever’s feeds, and I have a feeling that heads will roll. Or at least try to, since Johanna knows what’s going on and is puppetmaster.

I’m looking forward to the next issue having more of our favorite Serfs. As except for these shorts in the back, these stories are very focused on the elites in this world. While Johanna may seem to treat Forever and Eight better than Malcolm, this is still a shitty authoritarian world, and power always corrupts.

As for “Services Rendered” by Andrew Constant, I found this story rather predictable. While it was interesting to see what happens to Peter as a Serf who retired from the military for medical reasons, the moment Stewart said he needed extra help with a hunting crew, I knew they were hunting people. While this shows the generational impact of class warfare and now people have a poor reflex to punch down, it seemed obvious. What I did like was how the story showed that even in this awful world, one person could have a positive impact. Even if he did have to kill Stewart to do it.